Drawing the essence of Oscar

Controversy has followed Oscar Pistorius throughout his remarkable athletics career, with the sprinter spending as much time fighting to clear his name off the track as he has shining on it. 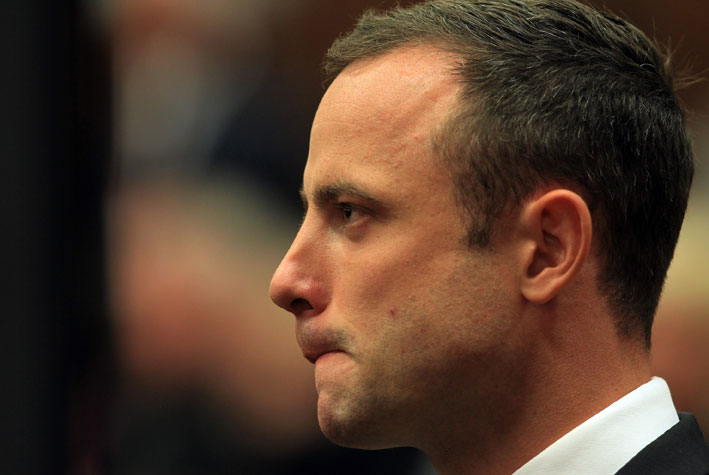 Oscar Pistorius looks on just after arriving at the high court in Pretoria, South Africa, Monday, March 3, 2014. Pistorius is charged with murder for the shooting death of his girlfriend, Reeva Steenkamp, on Valentines Day in 2013. (Themba Hadebe, POOL)

Born with congenital absence of the fibula, both his legs were amputated below the knee before his first birthday. But he never allowed his disability to prevent him from becoming an accomplished sportsman.

He played water polo, tennis and rugby during his school days, before focusing on sprint events.

Fitted with carbon fibre blades that gave him the nickname “Blade Runner”, Pistorius set his first world record at the age of 17, when he clocked 21.97 seconds to win the T44 200m title at the 2004 Athens Paralympics.

He first made a real impact in able-bodied athletics when he snatched a surprise silver medal in the men’s 400m race at the SA Senior Championships in Durban in 2007.

The following year he faced major controversy for the first time when he was banned by the International Association of Athletics Federations from compe-ting against able-bodied athletes, as his prosthetics allegedly gave him an unfair advantage over his competitors.

Eager to participate at the Beijing Olympics, he appealed to the Court of Arbitration for Sport after organising separate scientific tests and was cleared to compete in May 2008.

“My focus throughout this appeal has been to ensure that dis-abled athletes be given the chance to compete fairly with able-bo-died athletes,” Pistorius said at the time.

With less than three months remaining before the Games, Pistorius attempted to qualify for the men’s 400m sprint – but he missed the qualifying standard by 0.70 seconds.

He nonetheless went on to grab three gold medals at the Beijing Paralympics, setting a T44 world record in the 400m final.

Over the next few seasons he established himself as one of South Africa’s top one-lap specialists, and clocked 45.07 seconds at a meeting in Lignano, Italy, in July 2011 to become the seventh fastest South African of all time.

Pistorius went on to break new ground the following month when he reached the semifinals of the individual 400m event and snatched a historic silver medal in the 4x400m relay at the World Athletics Championships in Daegu, South Korea.

He was widely criticised in September that year when he stormed out of a BBC radio interview after being asked if he considered himself “an inconvenient embarrassment” to athletics authorities.

His progress on the track continued, however, and he produced the best season of his career in 2012, setting the three fastest 400m times by a South African.

Though he achieved the qualifying standard for the London Olympics on home soil, he narrowly missed out on the mark in international competition, which was required according to the national criteria.

Pistorius was a shoe-in, however, for the 4x400m relay team, and as he was already attending the Games he was allowed to compete in the individual event as well – somewhat controversially – and became the first amputee to compete on the track at the quadrennial able-bodied showpiece.

He again reached the semifinals in the one-lap event and led the relay quartet to eighth place in the final.

Three weeks later he was back on the track at the London Olympic Stadium for the Paralympic Games – and again hit the headlines for all the wrong reasons after he was handed a rare defeat by Brazilian Alan Oliveira in the 200m final.

Pistorius lashed out after the race, claiming Oliviera’s prosthe-tics were longer than allowed, but he apologised for his comments the following day.

He has not turned out in an official race since the Paralympics. 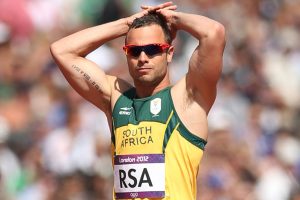