The tall German will now play Russian Karen Khachanov in the men's final on Sunday. 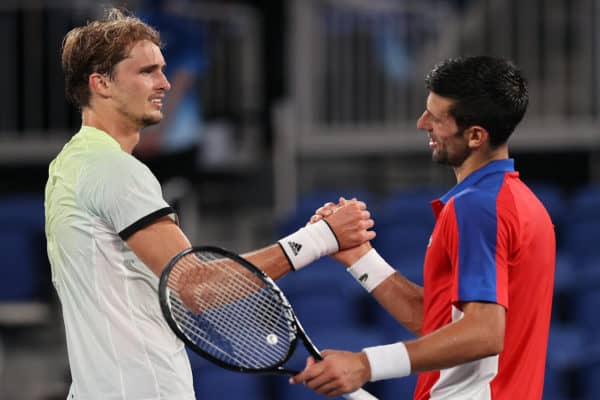 Alexander Zverev of Germany shakes hands with Novak Djokovic of Serbia after dumping out the world number one at the Tokyo Olympics semi-finals stage on Friday. Picture: Clive Brunskill/Getty Images

Novak Djokovic’s bid for a calendar Golden Grand Slam was dramatically ended by Alexander Zverev in the Olympics men’s singles semi-finals on Friday.

The world number one collapsed from a set and a break ahead as German fourth seed Zverev won 1-6, 6-3, 6-1 to set up a Sunday final against Russian Karen Khachanov.

The 34-year-old Djokovic has never won the Olympic singles title.

The Serbian star had already captured the Australian Open, French Open and Wimbledon trophies this year and needed Olympic gold and the US Open crown to emulate Steffi Graf, who achieved the feat in 1988, by winning the Golden Slam.

But his attempt to make history came to a close as Zverev powered 30 winners past the usually impregnable Djokovic in a stunning display.

It was yet more heartbreak for the 20-time Grand Slam champion at the Olympics, where his best result is a bronze medal in 2008.

He lost to eventual winner Andy Murray in the semi-finals in London nine years ago, and was in tears after a first-round exit to Juan Martin del Potro at the 2016 Rio Games.

Zverev is looking to become the first German to win singles gold since Graf in Seoul after winning 10 of the last 11 games against Djokovic.

Khachanov, a former top-10 player who has struggled for consistency in the last three seasons, produced an impressive display earlier to dispatch Pablo Carreno Busta 6-3, 6-3.