Cheetahs turn it around in second half

Pre-season games are designed for a reason, such as showing up the cracks evident in the Cheetahs' armour against the Kings in Port Elizabeth at the weekend. 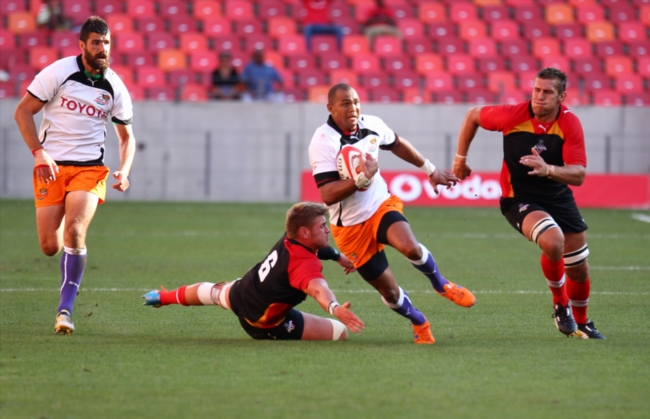 Cornal Hendricks of the Cheetahs during the Super Rugby Warm Up match between EP Kings and Toyota Cheetahs at Nelson Mandela Bay Stadium on January 25, 2014 in Port Elizabeth, South Africa. (Photo by Michael Sheehan/Gallo Images)

At times it almost appeared as though it was the Kings who are the Super Rugby outfit and not the visitors, with the home team racing to a 21-7 lead before the Cheetahs finally stirred.

It took 24 unanswered points from the Cheetahs in the second stanza to win 36-21 and to finally take the fight out of the Kings who led 21-12 at the break.

It will be worrying for Cheetahs coach Naka Drotske that his acclaimed midfield combination of Francois Venter and Johann Sadie were found wanting in the first half, leading to three fine Kings tries, one by centre Ronnie Cooke and two by wing Shakes Soyizwapi.

But their defence, one of their strongest points last year, needs addressing, especially in the absence of centre Robert Ebersohn. Flyhalf Johann Goosen also needs more time to recover his magic.

The Cheetahs however built on their opening try by captain Adriaan Strauss and the one by flank Jean Cook just before the break to take control in the second half.

The Kings lost scrumhalf Jaco Grobler with a yellow card in the third quarter, but yet they wouldn’t budge.

It wasn’t until the 66th minute that the Cheetahs finally took the lead when wing Raymond Rhule scored. Jean Cook added a second and replacement flank Boom Prinsloo crossed twice.

With the Cheetahs leading 29-21, Prinsloo scored his second off a rolling maul just two minutes before the end to put the score beyond doubt.

The Cheetahs scored three of their six tries through rolling mauls and their tight facets were impressive, evident from the manner in which they dominated in the second half.