‘Moose’ Marx will get his Bok chance, but when?

It’s six games and that’s how we look at it, certain players will get an opportunity and hopefully Malcolm will get his chance, the Bok coach says. 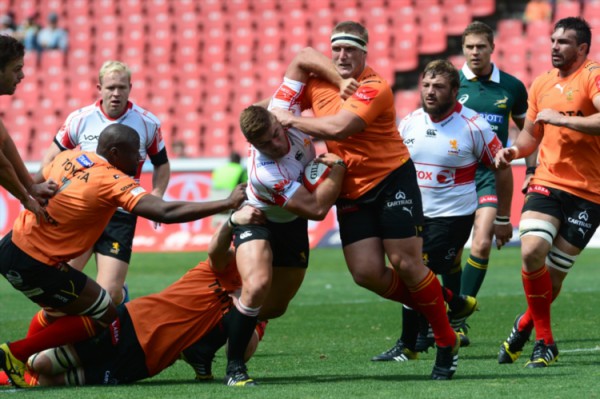 Malcolm Marx of the Lions tackled by Luan de Bruin of the Cheetahs during the Absa Currie Cup semi-final match between Xerox Golden Lions and Toyota Free State at Emirtates Airline Park on October 17, 2015 in Johannesburg. (Photo by Lee Warren/Gallo Images)

Burly Lions hooker Malcolm “Moose’ Marx has been on everyone’s lips after his sensational season – but he might have to wait a while before earning his first Test cap with the Springboks.

Having being compared to Bismarck du Plessis when he first started out with the Lions, the 22-year-old former King Edward School pupil is not seen at this stage as a threat to captain Adriaan Strauss.

“We still have to look at Malcolm and work with Malcolm, the fact that he has the talent and potential is without a doubt,” said Bok coach Allister Coetzee ahead of the opening Rugby Championship Test on August 20 against Argentina in Nelspruit.

“It just shows one how things work in life, you wouldn’t have known whether Malcolm would have played as well as he has and rewarded with a place if (fellow Lions hooker) Robbie Coetzee wasn’t still injured (knee). Because Robbie was in the training group when the Boks were overseas in 2014, but Malcolm has taken his opportunities and I’m really happy that we could have him,” said Coetzee.

Earlier in his career Marx was a loose forward before being turned into a hooker and with his big bulk he was instrumental getting the Lions over the advantage line, but Coetzee said there’s more to it.

“There are different kind of hookers, like a set-piece hooker and then you have one who is normally very good in the loose, I just think we are so fortunate to have Adriaan who is a bit of both. And he has proven in Super Rugby that he is the most successful and not because he is the Bok captain, he is what’s needed at Test match level, you need to hit the high-nineties in the lineouts and set phase, and where tries are still being scored from is from lineouts.

“And sometimes you get a hooker who is good in the loose and broken play, but when it comes to set-piece he is not there yet.”

And when it comes to the pecking order Bongi Mbonambi is next in line, who have overtaken Scarra Ntubeni as the Boks’ No 2 choice.

“Bongi has really done nothing wrong, more right than anything wrong in the three minutes of his debut in the third Test, not to give him his cap but to play a defensive role which we knew he could do. The captain was also happy that I made the call at the time because we were under the cosh and needed Bongi there to do what he was really strong in, and he did that.

“It’s six games and that’s how we look at it, certain players will get an opportunity and hopefully Malcolm will get his chance and see what he can do at Test match level. And the thing with Scarra Ntubeni is that I said I will look at form, although that’s not the only criteria and Scarra needs to play after been hit by injuries or playing off the bench.”