Coetzee believes they have identified the struggles they encountered against Ireland in the June series. 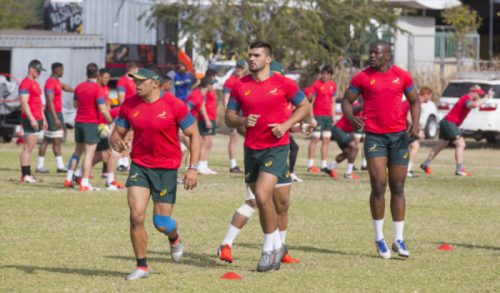 After been found wanting at the breakdowns in the recent Ireland series, Springbok coach Allister Coetzee believed they had sorted this area in their game out before this weekend’s Rugby Championship opener against Argentina.

While the Boks have beaten the Pumas away from home both in Argentina and in England during last year’s world cup, they have lost to the Pumas the last time they faced them on SA soil last year in Durban.

Coetzee believed they had identified the struggles they encountered against Ireland in the June series.

“The ball-carries sorts out our breakdown and we want ensure our body height is correct when making contact to give us that go-forward and winning that gainline battle,” said Coetzee.

“Whether you are tackled high or low makes a massive difference, and that’s what the Lions have done extremely well, not line-breaks but tackle breaks,” he said.

“They always won the advantage line battle, it’s a tap here and getting tackled there and Faf de Klerk getting the ball out quickly and that speeds up the game.

While the Boks have two of the best fetchers in flankers Francois Louw and Jaco Kriel Coetzee warned that was not always about the numbers but what actually happensd before the actual contact occurs.

“It’s not about sending numbers to a breakdown, otherwise you take your attack numbers and width away.

“You want a breakdown where you beat the guy with a soft shoulder inside and outside, over the gainline.

“Then send in one or two cleaners maximum and the ball goes and that quick ball eats up numbers on the defensive line, as it takes longer for them to set and that’s when there’s space and you can run into that space,” he said.

Coetzee admitted that the same way the Irish put the Boks under pressure with their rush defence, the Hurricanes did the same to the Lions.

“But what the Irish did cleverly is that they came off the line – same with the Hurricanes.

“They get you behind the gainline, and then it snowballs because now you start running on slow ball where you actually just need to cut your losses.

“And get back on the frontfoot, get the territory, if you have a good contesting lineout and you steal it, you are in the poundseats,” he said.