Boks come from behind to beat Argentina

In a nailbiter finish, the Boks scored two tries in the last 10 minutes to beat the visitors in Nelspruit 30-23.

The sheer signs of joy at the final whistle of tonight’s tense Rugby Championship Test between the Springboks and Argentina at the Mbombela Stadium said it all, as the Boks edged the Pumas 30-23 in a tense thriller.

Bok No 8 Warren Whiteley’s winning try two minutes from time literally signed the deal for the Boks, but soon afterwards he still had to recover a wayward kick as the Boks tried to kick the ball out in touch on the stroke of fulltime.

Panic stations? No way! Whiteley simply regathered as he was bundled out in touch on a night which in retrospect was far from ideal for the Boks.

They got exposed in the rucks and the scrums, especially after prop Julian Redelinghuys had to leave the scene after just 31 minutes with possible concussion, but credit to Vincent Koch and Steven Kitshoff, who discovered their mojo later, assisted by the introduction of Jaco Kriel and Pieter-Steph du Toit.

Bok coach Allister Coetzee praised the team’s character when they were down 23-13 with less than 15 minutes left to play.

“That is something you can’t coach; the players really showed character and guts and we realise next week in Salta is going to be even tougher,” said Coetzee.

After the half-time scores were locked at 13-13, the Pumas surged ahead to lead by 23-13 with just 15 minutes left to play as their flyhalf Nicholas Sanchez first landed a penalty and then converted the try by wing Santiago Cordero in the 66th minute.

The Boks, however, fought back through the brilliance of Man-of-the-Match No 9 Faf de Klerk who was thrown in the air as he made the pass to fullback Johan Goosen for a great try in the 75th minute and, with the addition of the conversion and penalty by flyhalf Elton Jantjies, the Boks squared matters at 23-23 before the final moment of magic from Whiteley, with Bok lock Eben Etzebeth making valuable yards.

In the first half the Boks were first on the board after a great try by rightwing Ruan Combrinck after a break by Jantjies to lead 7-0 after just eight minutes, but the Pumas came to play and surged ahead 13-10 in the 25th minute after a try by centre Matias Orlando and two penalties and a conversion by Sanchez, while Jantjies added a penalty 15 minutes after halftime to level scores at 13-13.

The Boks are set to leave for Argentina on Sunday for their return match against the Pumas on August 27 in Salta. 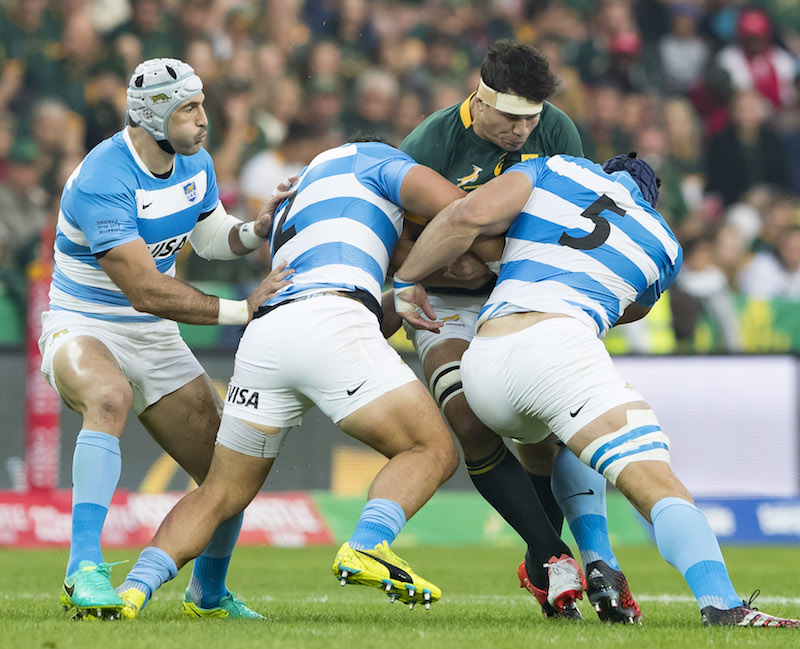 FT The Boks have edged Argentina 30-23 with Whiteley getting the winning try in the 78th minute #SAvArg nerve-wrecking stuff!!

*66 Cordero try for Argentina! 13-23 #SAvArg and the Boks look in deep trouble as they have a mountain to climb!

Springbok captain Adriaan Strauss said on Friday that while they viewed today’s Test match in the Rugby Championship against Argentina as one where the Bok traditions would be focused on, they would not necessarily follow the conservative route.

The recent Test series against Ireland didn’t show much evidence of sparkle in the Bok backline, but Strauss believed the Boks are heading in the right direction.

“I think Test match rugby is definitely different to provincial rugby, but we are heading to a direction where we want to make good decisions on the field.

Coach Allister Coetzee has made five changes to the squad: Julian Redelinghuys will earn his first start, while Bryan Habana, Johan Goosen, Oupa Mohoje and Lood de Jager all return to the side.

Redelinghuys, capped four times, comes in at tighthead as replacement for the injured Frans Malherbe, who is struggling with a neck injury. Lock De Jager has recovered from the calf injury he sustained against Ireland in June and takes over the No. 5 jersey from Pieter-Steph du Toit, who will provide cover from the bench.

The third change in the pack sees the return to the starting lineup of Mohoje as replacement for Siya Kolisi, who recently underwent ankle surgery.

In the back division, Springbok record try scorer Bryan Habana will run out in his 118th Test after he was named as left wing, while he was also confirmed as the Springbok vice-captain.

The versatile Goosen, who is equally at home at flyhalf and centre, has been entrusted with the fullback duties, the same position where he played in his previous outing for the Boks, in 2014 against Italy.

'I need to write a new story' at Toulon, says Springbok star Kolbe
22 hours ago
22 hours ago

'I need to write a new story' at Toulon, says Springbok star Kolbe
22 hours ago
22 hours ago