The visitors went on the offensive on Saturday, making 97 to 76 carries in the match. 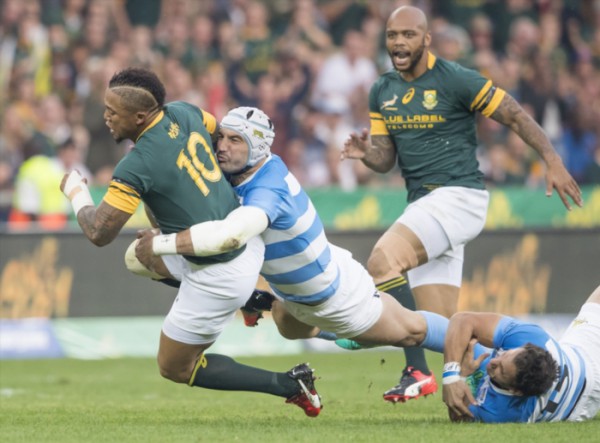 Elton Jantjies of the Springbok Team during The Rugby Championship match between South Africa and Argentina at Mbombela Stadium on August 20, 2016 in Nelspruit, South Africa. (Photo by Dirk Kotze/Gallo Images)

Argentina made the Springboks work for their 30-23 victory in their opening clash of the Castle Lager Rugby Championship in Nelspruit on Saturday.

Statistics taken from the All Out Rugby App demonstrated clashes between the sides are no longer a one-sided affair. Although the scoreboard reflects a seven-point victory for the Boks, it could easily have been one for the South American powerhouse. Scoring 17 points in the closing 10 minutes of the match South Africa used its get-out-of-jail-free card in a dramatic finish.

In the end it was one converted try that saved the Boks’ blushes as Warren Whiteley clinched the thriller at the death. It was an otherwise equal encounter although Los Pumas enjoyed 55 percent of both the territory and the possession.

The visitors went on the offensive on Saturday making 97 to 76 carries in the match. The gritty Argentinians made double the amount of clean breaks finding the gap on eight occasions. The Boks beat one more defender in comparison to the tourists while they ran only 33 metres less than Argentina.

South Africa also trumped them at the breakdowns, making nine turnovers to five. The Boks had to defend their line from a relentless Argentina, making 84 tackles, 19 more than their opponents, while missing one less. Bok flanker Oupa Mohoje was the top defender over the weekend making 13 tackles.

Errors were also fewer on the South African side fumbling 11 to 12 while conceding one penalty less than the visitors. While the Boks were slightly better in the lineouts, winning two more balls on their own throw, Argentina had the same advantage in the scrums.

As the digital home for everything Springbok related during the Castle Lager Rugby Championship, fans will have access to a wealth of rugby content on the All Out Rugby App, powered by Vodacom.

The All Out Rugby App is available for free on the Google Play store, iOS App store, and the Vodacom App store.

Power to the Rugby Fans

Match Statistics from the All Out Rugby App powered by Vodacom

'I used to see them leaving the house at night,' says neighbour on 50 men rescued in Lenasia
9 hours ago
9 hours ago

'I used to see them leaving the house at night,' says neighbour on 50 men rescued in Lenasia
9 hours ago
9 hours ago