The Golden Lions rediscovered their Currie Cup momentum with a runaway 60-12 win over Boland at  Ellis Park on Friday night. 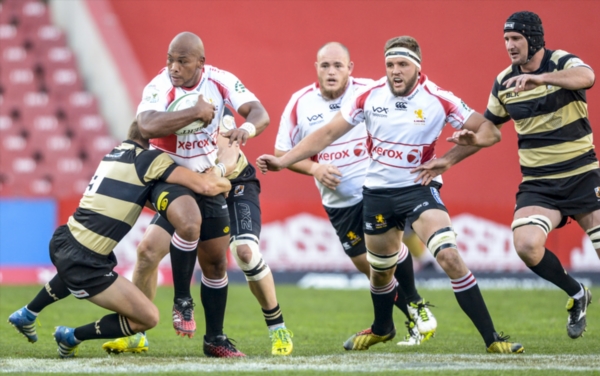 Leading 27-12 at the break the Lions scored nine tries in total, four in the first half and another five in the second half.

The Lions got off to a flyer running to a 12-0 lead early after tries by wing Selom Gavor in the fifth minute and wing partner Anthony Volmink in the 12th minute with flyhalf Marnitz Boshoff converting Gavor’s try but wide with his second attempt.

Boshoff added a penalty in the 24th minute for a handy 15-0 lead but then Boland got one of their own when lock Joubert Horn fended off some weak defence by the home team to score under the posts to reduce matters to 15-7 after flyhalf Theuns Kotze added the extra two.

In the 31st minute the Lions displayed some excellent hand-to-hand movement for scrumhalf Dillon Smit to score a superb try to stretch the lead to 22-7 after Boshoff was on song with the conversion.

Boland No 8 Wayne Wilschut scored his team’s second try in the 36th minute after a well executed maul to change the score to 22-12, but unfortunately Kotze was wide with the conversion on this occasion.

The Lions spirit was well displayed when they scored their fourth and bonus point try after the halftime hooter already went and after some great handling skills involving the whole squad just about it was centre Jacques Nel who got up with the ball, but unfortunately for the Lions Boshoff was wide with the attempted conversion.

Boshoff added 15 points with the boot and even though he missed three of his 10 attempts nobody would really complain on a dominant night for the Lions and defending champions.