Having come together in June as a new team, the growing pains are still very much evident. 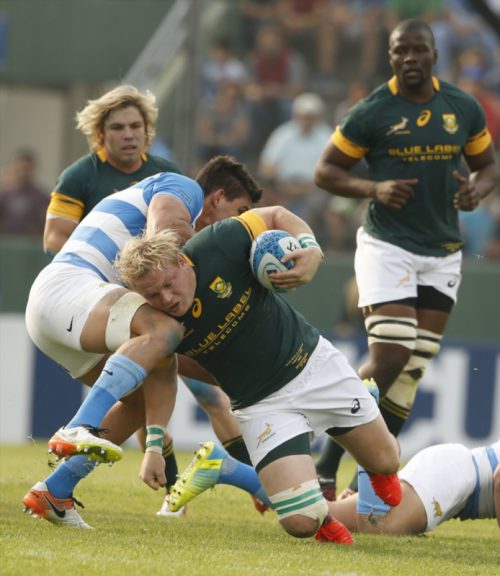 Adriaan Strauss of South Africa fights for the ball with Pablo Matera of Argentina during the Rugby Championship match between Argentina and South Africa at the Estadio Padre Ernesto Martearena Stadium on August 27, 2016 in Salta, Argentina. (Photo by Gabriel Rossi/Gallo Images)

The Springboks arrived back in the country on Monday morning after their disappointing 26-24 defeat to Argentina last weekend in Salta in the Rugby Championship.

Bok captain Adriaan Strauss said shortly after their arrival around 8am – with very few fans present to welcome them back – they have addressed their shortfalls, having already watched a video recording together as a squad.

The Boks leave again for Brisbane on Thursday for their next Test against the Wallabies on September 10.

“Obviously we were bitterly disappointed, but unfortunately the nature of the Championship is that it was just the second game and some tough matches are still lying ahead,” said Strauss.

“And we told each other after the game that it’s going to hurt for some time, we watched as a team the video, and technically we discussed everything and saw that we made a lot of mistakes, individual errors that we can’t afford at Test match level.

“And like they say the margin for error isn’t huge, I think we are still lacking a bit of cohesion, it’s things that comes with time, but I believe we can speed it up. We are still getting to know one another on and off the field, the next game will be a very tough one, and we will have to lift our heads and get up.”

Having come together in June as a new team, the growing pains are still very much evident.

“It’s always a reality that you have to get to know each other, but that’s not our focus, your aim is at every single Test we are involved in to try and play every game well and attempt to win it and to improve with each game and that’s the focus.

“I can’t say it’s taking longer as a team to become a unit, where a draw or a narrow win might have changed the entire picture. We had two games in the Championship, and we can’t forever live in the past on what happened against Ireland, we had to learn from that and have to realise we are making small little errors and crucial moments in a game are costing us.”

Building scoreboard pressure have been one of the big problem areas with the Boks having to chase the  game in all five of the Test matches they have played this year.

“We know how important it is to get into the lead and to build that pressure, and it’s something we are still struggling with is to apply pressure on teams and are currently more under pressure to chase a score.

“We are of course keen to turn it around in Brisbane. It’s bad times at the moment, but we must rise again, the guys are still hugely positive.

“And while it hurts we are going to make the calls when we get together again to take this thing forward and to fight back even harder.

“And to be more clever, to go and assess where we are making those mistakes and fix that and try to ensure it doesn’t happen again.”