DHL Western Province pulled away from the Cell C Sharks in the second half to secure a 34-27 bonus-point win at DHL Newlands on Saturday. 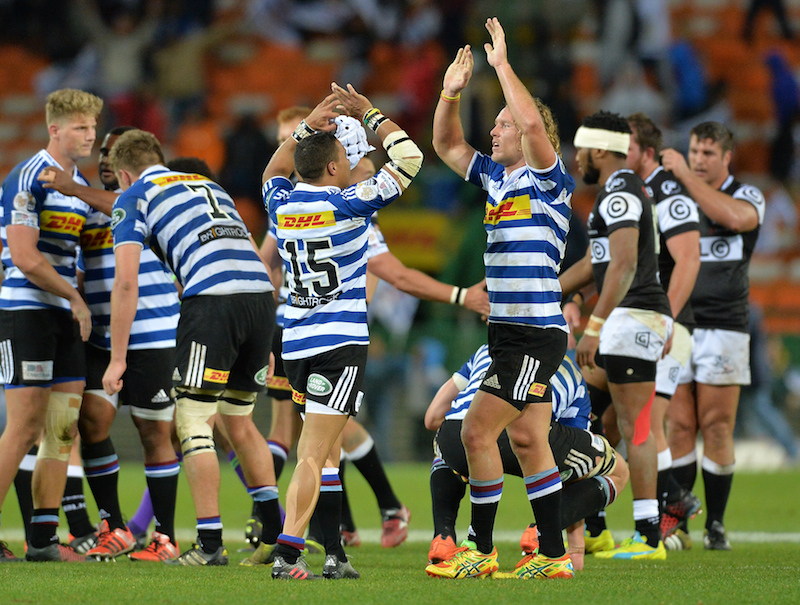 It was the second straight win for coach John Dobson’s team, who outscored the previously unbeaten visitors by five tries to two in an entertaining match.

The home-side made a bright start to the game, as captain Chris van Zyl claimed the kick-off. They camped in opposition territory, and were rewarded with an early try as Johnny Kotze took a switch pass from Robert du Preez to burst through. The visitors got on the scoreboard with a penalty from fullback Curwin Bosch, but DHL Western Province responded with a second try as Werner Kok collected a chip ahead from Du Preez to race away for his first try at DHL Newlands.

That put DHL Western Province 14-3 up after a breathless opening 10 minutes, but they suffered a blow when hooker Scarra Ntubeni had to be stretchered off the field following a collapsed scrum.

The teams traded penalties before the Cell C Sharks managed to score their first try as the ball was worked wide to Jean-Luc du Preez who scored in the corner to cut DHL Western Province’s lead to 17-14.

Two more penalties from Bosch just before half-time saw the visitors take a slender 20-17 lead into the break.

DHL Western Province made a determined start to the second half, and stormed into the visitors’ 22 where they launched a series of driving mauls before a pinpoint cross-kick from Du Preez was won in the air by outside centre EW Viljoen who crashed over to score in the corner and put the home side back in front.

The Cell C Sharks were struck a further blow when their Du Preez was shown a yellow card for a dangerous tackle, although his team did not concede any points while he was off the field.

DHL Western Province secured the bonus point when some slick hands from replacement prop JP Smith put No.8 Kobus van Dyk over in the corner after a powerful maul had taken them right up to the try-line.

That gave the home side a seven-point lead with 20 minutes left to play, and they doubled that soon afterwards when Viljoen collected a neat grubber from Du Preez to score his second try.

The Cell C Sharks responded with a try from replacement back Rhyno Smith, but that was not enough as DHL Western Province held out for a deserved win.