Griquas would continue to run proceedings, but a resolute DHL WP defence prevented the hosts from adding to their score. 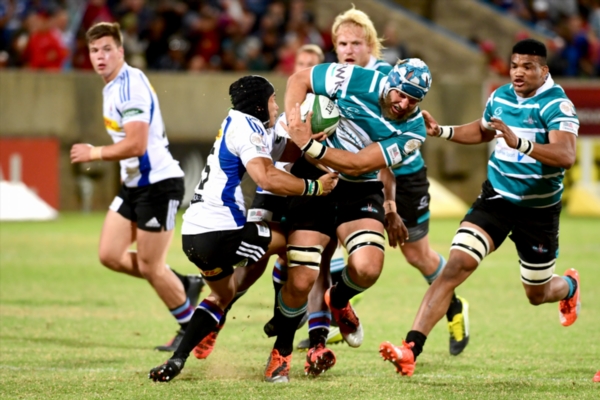 Andre Swarts of the Griquas during the Currie Cup match between Griquas v DHL Western Province at Griqua Park on September 23, 2016 in Kimberley, South Africa. (Photo by Louis Botha/Gallo Images)

Western Province overturned a 17-21 deficit at halftime to record a strong bonus-point 52-31 Currie Cup victory over the Griquas in Kimberly on Friday night, leapfrogging the hosts into fourth place.

Griquas set the tone of the match early on as they dominated possession and territory with strong carries and a dangerous backline. The hosts were rewarded for their strong start with the opening try of the match in just the 10th minute, with the subsequent conversion handing them a 7-0 lead.

Griquas would continue to run proceedings, but a resolute DHL WP defence prevented the hosts from adding to their score. It was thanks to this defence that DHL WP were gifted a counter-attacking opportunity with the likes of Leolin Zas, Huw Jones, and Juan de Jongh linking up well for the Springbok centre to dot down for a converted try in the 25th minute. However, Griquas bounced back soon after with a try of their own to reclaim their seven-point lead.

DHL WP showed great mental resolve as they made the most of another counter-attack which led to hooker, Bongi Mbonambi, scoring from close range to level the scores once again – making it a try apiece for the side’s two Springboks. Griquas again responded well as they scored their third try in the 33rdminute. A well-taken penalty by DHL WP flyhalf, Rob du Preez, left the scores 17-21 at halftime in favour of the hosts.

The second half began with both teams trading penalties before DHL WP began to exert their dominance. Two quick tries to Huw Jones and Werner Kok in the 51st and 53rd minute respectively suddenly put the visitors in a commanding 32-24 lead and secured the bonus-point. Both tries came from set-piece dominance and silky backline moves as Du Preez once again began to put his stamp on the game.

A 65th minute penalty by Du Preez only put the result further beyond doubt and a try by Nizaam Carr, six-minutes later, put it beyond doubt as DHL WP grabbed a 42-24 lead. Griquas would add one more converted try to their tally before a Du Preez penalty and last-minute try by Zas meant the scores ended 52-31 in favour of the men in blue-and-white.

The result sees DHL WP leapfrog Griquas into fourth place, putting them into a handy position with one more match remaining against the Boland Cavaliers before the playoffs.