Two quick tries in the five minutes after the break ensured it was no longer a contest as the Lions raced to a 38-7 lead. 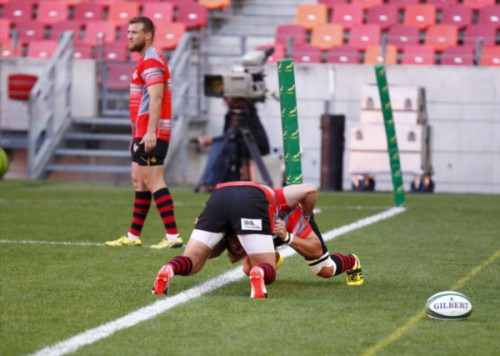 It was a mission accomplished for the Lions on Saturday night as they stayed in contention for the Currie Cup playoffs and have now set up a sudden-death date with the Sharks for a place in the last four at Ellis Park next weekend.

Having lead 26-7 at the break and after making initial heavy weather of their mission to get the full haul, the Lions didn’t break much of a sweat eventually to rollercoast 71-7 past the hapless EP Kings in Port Elizabeth on Saturday evening.

Highlighted by a hattrick from captain Kwagga Smith and a brace each from centres Howard Mnisi and Jacques Nel, the Lions already scored four tries in the first half and added another seven in the second for 11 tries in total from the game.

After an initial battle to break down the resilient Kings defence, not helped by countless basic errors, flank Ruan Ackermann finally broke the deadlock to score the opening try in the 18th minute for a 7-0 lead.

And while the Kings hit back to score their first try through wing Sampie Mastriet to score the equaliser in the 22ndminute to tie matters at 7-7, the Lions then started to find their rhythm.

Tries by centre Howard Mnisi (his first) in the 30th minute, wing Koch Marx in the 38th and captain and flank Kwagga Smith for his first of his hattrick and the bonuspoint try on the stroke of halftime ensured a 26-7 advantage.

Two quick tries in the five minutes after the break ensured it was no longer a contest as the Lions raced to a 38-7 lead after more tries by wing Antony Volmink in the 42nd minute and centre Jacques Nel (his first of two) in the 45thminute.

After that however being in complete control the mistakes started creeping in but with not much left in the contest the Lions couldn’t exactly be taken too harshly.

Smith barged over for his second in the 63rd minute for a 45-7 lead but he wasn’t finished as he completed his hattrick in the 66th for a 50-7 lead.

In the 70th minute Mnisi completed his brace of tries to give the Lions a 57-7 lead and just five minutes later fullback Sylvian Mahuza scored the 10th try for a 64-7 lead after replacement fullback Andries Coetzee converted having taken over from Jaco van der Walt who converted six of the Lions nine tries before being replaced.

On the stroke of fulltime Nel also completed his brace.