Springbok flank Teboho ‘Oupa’ Mohoje has been mentioned as a possible captaincy candidate when Adriaan Strauss retires at the end of the year. 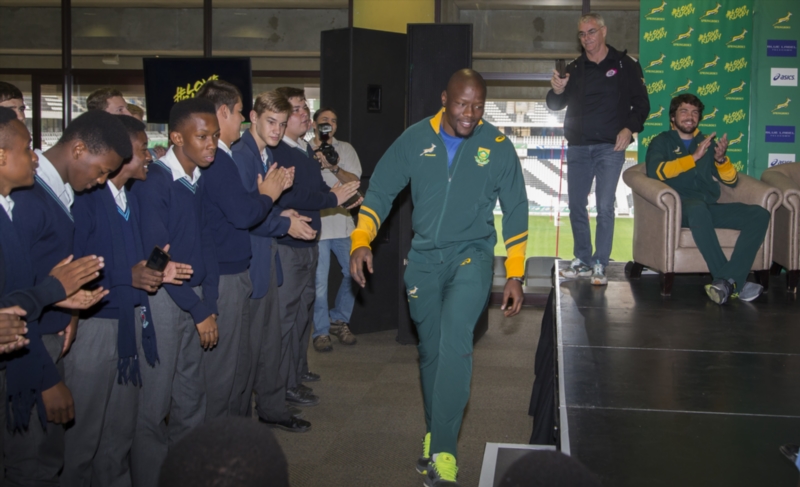 This week, however, Bok no. 859 Mohoje, 26, who is set to play in his 13th Test, cleverly dodged the question ahead of the Rugby Championship Test against Australia on Saturday at Loftus.

“Captaincy is something that will come when the time is right, the coach will select you if he wants you there and if he backs you, but for now the focus is just on the team,” Mohoje.

“I think the focus right now is to play as much rugby as I can, I think being here is providing us with an opportunity to prove ourselves and the team as a whole.”

Whereas coach Allister Coetzee made three changes this week to the backline, he retained the same pack that did duty in the last Test against New Zealand.

“There’s a lot of continuity in the pack from the last game and for the coach to stick with the same unit, it’s great for our growth and development.

“What we have learned from the All Blacks game is that we need to sharpen up on our defence, that’s what we’ve focused on this week.

“Maybe carry the ball a bit more, run a bit more, be a bit more direct as a pack and hopefully we can apply that this weekend.”

Mohoje, fellow flank Francois Louw and No. 8 Warren Whiteley have been in the spotlight with claims that the balance of the loose trio is out of zinc, but Mohoje believed it has been going well.

“I think the combination has been good, Warren on attack has done really well, and Francois has been good at ruck-time, and being a quality fetcher.

“And I think in defence, we all have played our part, and the more games we play as a unit the better we will become.”

Mohoje believed after lock Eben Etzebeth was yellow-carded in the last game between the two countries they could expect the Aussies trying to get under their skin.

“Discipline is vital not just in this game but the whole tournament,” he said.

“It’s easy for another player to get into your hair, but what’s working for us is to keep our calm, and even though they will try to provoke us, we just have to keep our composure.”