A consolation try by the Xerox Golden Lions on the stroke of full-time after a string of pick-and-goes saw them settle for a disappointing 55-17 defeat. 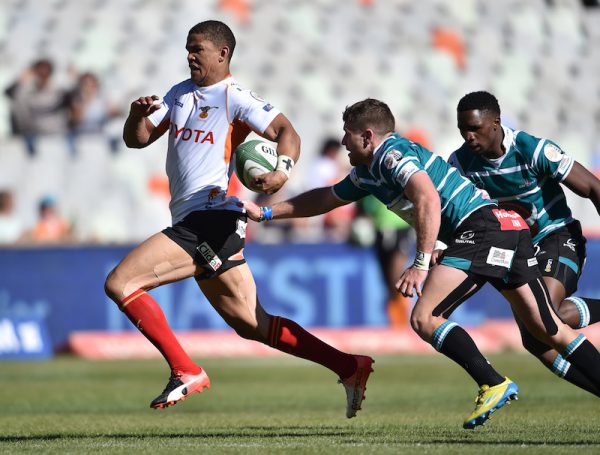 A hat-trick by Toyota Free State Cheetahs winger Sergeal Petersen and a 21 points by flyhalf Niel Marais on Saturday steered the Bloemfontein team to their first Currie Cup home Final since 2007 as they over powered defending champions, the Xerox Golden Lions, 55-17 in Bloemfontein.

They will face the Vodacom Blue Bulls, who defeated DHL Western Province 36-30 in an epic Currie Cup semi-final – brought to you by Nashua and DirectAxis – at Loftus Versfeld in Pretoria, compliments of a flawless kicking display by flyhalf Tiaan Schoeman and a late try by scrumhalf Ivan van Zyl.

The Toyota Free State Cheetahs’ victory in the semi-final not only booked them a home final, it also took them a step closer to completing a dream season, as it extended their winning run to nine matches – only two away from matching their record winning streak of 11 matches in the Currie Cup, which they set in 2007.

The Bloemfontein side were in fine form from the outset as they capitalised on the points on offer through penalty goals and tries, and supported this with a solid defensive effort.

Such was the effectiveness of their play, they boasted an encouraging 26-0 lead at the break and then built on this in the second half despite receiving two yellow cards, to finish the match with six tries to three by their Johannesburg counterparts and a memorable 55-17 victory.

The hosts were smart in the first half as they took advantage of the Xerox Golden Lions’ ill-discipline, which earned Marais four of his five penalty goals, while man-of-the-match Sergeal Petersen showed off his skills to score two tries, which handed the Free State a 26-0 lead. One of these tries were scored while the opposition were reduced to 14 men after flanker Cyle Brink was sin-binned.

The hosts added their third try 25 seconds into the second half, but they were dealt a blow minutes later as replacement winger Ryno Benjamin received a yellow card following several infringements by the team.

The visitors capitalised on this with a try by replacement winger Sylvian Mahuza, who added another try several minutes later following the Toyota Free State Cheetahs’ second yellow card.

The home side, however, hit back strongly with tries by Benjamin and Petersen which pushed them 55-10 ahead with five minutes left on the clock.

A consolation try by the Xerox Golden Lions on the stroke of full-time after a string of pick-and-goes saw them settle for a disappointing 55-17 defeat.

Similarly to Marais of the Toyota Free State Cheetahs, Schoeman’s flawless kicking performance of eight kicks out of eight for a personal total of 21 points proved crucial in their victory, although it was a try by replacement scrumhalf Van Zyl two minutes before the final whistle that sealed the victory.

Vodacom Blue Bulls winger Travis Ismaiel opened up the scoring with a try in the 10th minute, and DHL Western Province levelled the scores eight minutes later as No 8 Nizaam Carr crossed the chalk.

But the rest of the half was dominated by penalty goals with Schoeman slotting over three to only one by Du Preez, which saw the hosts enter the break 16-10 ahead.

The teams exchanged the lead several times in an action-packed second half in which both sides backed themselves on attack to cross the tryline twice more, while Schoeman and Du Preez each adding two penalty goals. The Vodacom Blue Bulls’ final try in the dying minutes, however, earned the team the victory.