The Boks will face the Barbarians next weekend followed by Test matches against England, Italy and Wales. 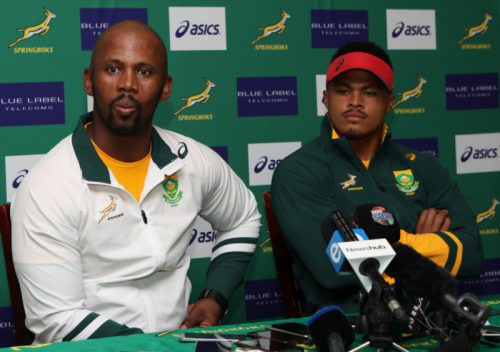 The Springbok camp are in great spirits ahead of their departure to London in the United Kingdom on Friday night, enthused backline coach Mzwandile Stick on Friday.

Stick addressed the media in Fourways in the company of three of the 12 uncapped players – centre Francois Venter and wings Jamba Ulengo and Sergeal Petersen.

The Boks will face the Barbarians next weekend followed by Test matches against England, Italy and Wales.

Stick said the fact that four SA players would oppose them in Barbarian colours next weekend in Cheetahs fullback Clayton Blommetjies as well as three Lions in hooker Akker van der Merwe, flank Kwagga Smith and No. 8 Ruan Ackermann is great for the country.

And while Stick said they would be under pressure, he quickly added there was always pressure even if you are winning.

“For us as South Africans it is great to see the guys being recognised, I think it’s good for our rugby,” said Stick.

“Especially where we are now as we also have a couple of new faces in our squad after being rewarded in the local tournaments, which is good,” he said.

Stick said there was also a great working environment between him and Franco Smith, who has come on board to fix the Boks tactical kicking game.

“For me as a coach, it’s always nice to work with the youngsters and the energy they bring and going on a tour like this where you are going to be five weeks away from home.”

Stick said Petersen, Ulengo and Venter are the faces of the future of SA rugby.

“Youngsters like Sergeal, Ulengo and them they are not married at the moment or have that stress and will be big-eyed but after playing in a Currie Cup final they have been recognised by the coach.

“But there’s also the leadership like Francois who had been leading the Cheetahs during tough times, it showed the character of the person,” Stick said.

How a woman living in Cape Town found a cat missing in the UK
3 weeks ago
3 weeks ago
PREMIUM!

How a woman living in Cape Town found a cat missing in the UK
3 weeks ago
3 weeks ago
PREMIUM!