Rohan to get his big Bok chance at Twickenham?

Van Rensburg effectively replaced Jesse Kriel in the squad, while Ulengo stayed behind as cover for Ruan Combrinck. 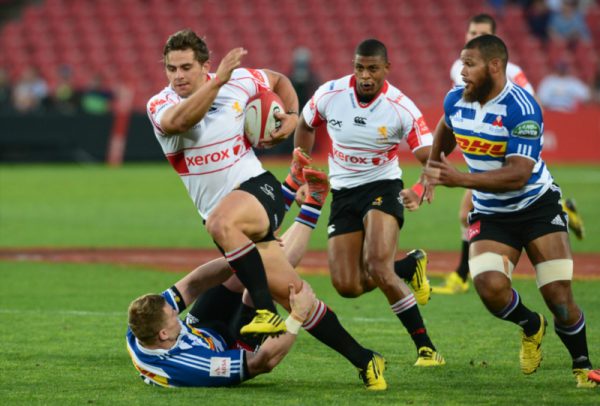 Probably one of the Springboks biggest stars against the Barbarians last weekend in London, Lions centre Rohan Janse van Rensburg did not have to return home after all – and now he could make his proper Test debut this Saturday against England at Twickenham .

Janse van Rensburg, who scored the Boks’ decisive fifth try three minutes from time to tie the scores at 31-31, was initially part of the group who was due to come home after the match.

But coach Allister Coetzee said it was within his rights to hold a player or two back in the case of injury concerns and Janse van Rensburg and wing Jamba Ulengo were the chosen ones.

Van Rensburg effectively replaced Jesse Kriel in the squad, while Ulengo stayed behind as cover for Ruan Combrinck, who replaced Kriel at Wembley, but who took another knock to the knee.

Two of the overseas-based players who joined the team Sunday ahead of the big England Test on Saturday fullback Willie le Roux and wing JP Pietersen, were also carrying minor niggles.

“Fullback Jesse Kriel went for a scan after the game to examine the niggles he picked up to his knee and ankle and was afterwards ruled out for the rest of the season and sent home,” said Coetzee.

While the Boks trailed 17-12 at the break and found themselves behind 31-19 it took two late tries from uncapped centres Francois Venter and Janse van Rensburg to share the spoils in the end.

“I think our mindset in the first half was probably not as accurate as the way we wanted to play, not like the Barbarians,” Coetzee said.

“But to keep putting pressure on their set-piece, and getting territory and to play from there,” said Coetzee.

And while flanker Roelof Smit, who has also been ruled out with a bicep injury on Monday, was great on debut he probably didn’t get all the support to create quick ball and to slow the Baa-Baas ball down.

“The most disappointing thing was the amount of possession we turned over,” Coetzee said.

“And it’s very detrimental against a Barbarians side who were fearless, who had nothing to lose and who wanted to play with the ball,” said Coetzee.

Coetzee said it’s something they will have to address this week.

“That is something that we’ll have to work hard on this week (for the clash against England),” said Coetzee.

“But having said that, it’s been a great game of rugby, and I think the spectators really got value for their money.”