The Springboks lost to the Italians for the first time in history in their 13th encounter, going down 20-18. 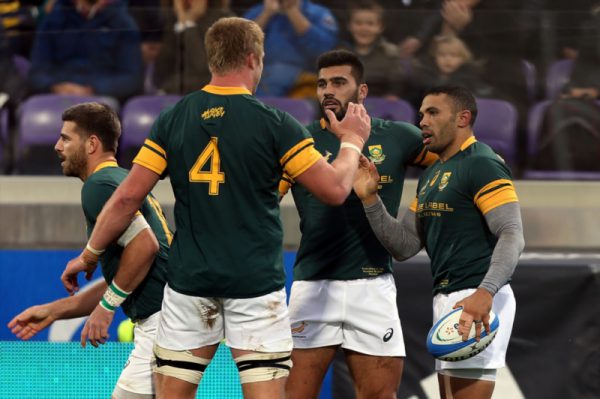 Calls for national rugby coach Allister Coetzee’s head to roll (so to speak) became even louder when the Springboks suffered a demoralizing and historic 20-18 defeat to Italy in Florence on Saturday night.

It was the first time in history the Boks have lost to Italy in 13 outings and signalled the Boks third straight loss after big defeats to New Zealand and England.

But more alarmingly it was the Boks seventh defeat in 11 Tests – the first time they have suffered seven losses in a season since 2006 while they have lost six in 2010.

While both teams scored two tries each and the Boks holding a narrow 12-10 lead at the break, the game was again lost at the breakdown where talismanic Italy captain and No 8 Sergio Parisse proved monumental.

The Boks started off well when wing Bryan Habana scored his 67th Test try in the ninth minute after some brilliant running from fullback Willie le Roux who identified the space for a lead of 5-0 after flyhalf Pat Lambie fluffed the conversion.

Italy were quick to hit back with their first try by SA-born lock Dries van Schalkwyk after a driving maul from a lineout and with flyhalf Carlo Canna converting Italy went ahead 7-5 in the 12th minute.

Le Roux was again in the action in the 19th minute to create the space for centre Damian de Allende who went storming down the touchline for the second Bok try and a lead of 12-7 after Lambie made the conversion.

In the 30th minute Italy fullback Edoardo Padovani converted a long-range penalty to reduce the Bok lead to just 12-10 which eventually became the halftime score.

With Italy often guilty driving underneath the Bok player airborne in the lineout, Italy lock George Biagi was eventually yellow-carded in the 42nd minute which eventually allowed Lambie to kick the Boks to a 15-10 lead by the 46th minute.

The killer blow was however landed by big 110kg leftwing Giovanbattista Venditta scored Italy’s second try in the 57th minute for a 17-15 lead when he simply shoved Elton Jantjies to one side who just minutes earlier replaced Lambie.

In a way Jantjies redeemed himself by landing a difficult penalty in the 61st minute to regain the lead at 18-17.

But the killer blow was landed by Canna with his penalty in the 65th minute and it could’ve been worse had they had a 79th minute try awarded when they drove over the Bok line but a foot in touch ruled it out.

But the win remained.

And no doubt Florence celebrated in a big way on Saturday night.

The Boks started their tour with a 31-31 draw in a non-Test against the Barbarians before suffering a crushing 37-21 loss to England last weekend at Twickenham – their first defeat to England in 10 years and 13 matches.

Since the Boks beat Ireland 2-1 in June they have only won two of their next seven Tests, which resulted in just four wins from 10 this year after winning only two of their six games in the Rugby Championship.

The Boks haven’t tasted success since October 1 when they beat Australia 18-10 at Loftus, where flyhalf Morne Steyn was responsible for all of the Boks’ points with the boot.

This will be hooker Adriaan Strauss’ 11th Test as Bok skipper in his 65th Test and he will enjoy his swansong against Wales next weekend in Cardiff.

Italy on the other hand are coming off a heavy 68-10 defeat to the All Blacks last weekend.