But when you consider the Argentinians boast the wily Nicolas Sanchez, it dawns on you how Bosch is undeniably a risky pick. 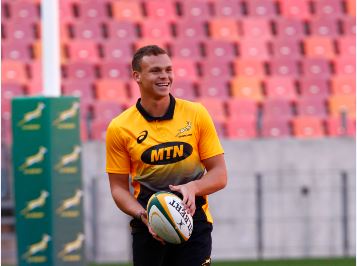 Opinion is still divided on the timing of young Curwin Bosch’s inclusion in the Springboks squad but it probably doesn’t really matter anymore.

Named on the bench for the Rugby Championship opener against Argentina on Saturday in the friendly City’s Nelson Mandela Bay Stadium, the gifted 20-year-old is now set to make his international debut.

As Springbok coach Allister Coetzee explained, the management team first had to take a good look at him.

“And we didn’t have a good picture of his general play ability as a 10 and when I talk about general play as a 10 it’s just not skills but also his communication skills.”

The Springboks coach believes Bosch has a calm head on his young shoulders but they will still gradually expose him to international rugby.

“Having watched him, he is actually quite mature for a 20 year old. He’s got a great head on his shoulders,” said Coetzee.

“You can see there is an air confidence and we need to unlock that more in order to give direction and I’m happy what I’ve seen. And the other coaches are also happy from what they have seen so that’s why he has been afforded the opportunity.”

At the other end of the spectrum, the Springboks will need to keep experienced Argentinian flyhalf Nicolas Sanchez is check.

He really does make Bosch – who’ll cover flyhalf and fullback – look wet behind the ears.

“Sanchez is a great kicker of the ball. We were tested last year on the small field in Salta and they fired some aerial bombs,” said Coetzee.

“But we are well prepared for that, hopefully we see that as an opportunity and can capitalize on that.”

Coetzee said the Boks’ biggest challenge will actually come down to what to do when they are without the ball rather than with the ball.

“The Argentines love ball in hand and to carry that so our defence will also be tested and when it comes to broken play that’s where they are at their most dangerous.

“Their little 9 (Thomas Cubelli) will snipe and Sanchez will look to play inside ball, I’ve done a lot of preparation on them and hopefully we can execute it this weekend,” he said.

Coetzee also said that the Pumas are not pretenders any more but real contenders.