Jan Serfontein's absence provides Allister Coetzee with a poser in midfield while there'll surely be changes to the front-row too. 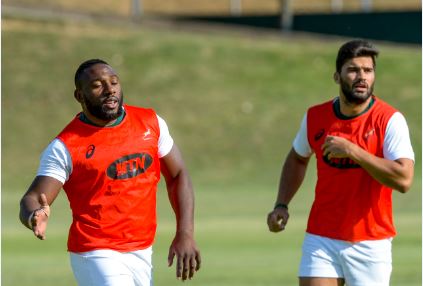 Beast Mtawarira and Damian de Allende are likely to be in the Springboks' starting line-up in Dublin. Photo: Sydney Seshibedi/Gallo Images.

The Springboks are likely to go into this weekend’s Test against Ireland with new midfield and front row combinations.

The second of the two Bok touring parties arrived in Dublin on Sunday and coach Allister Coetzee was set to hold his first media conference of the tour this morning.

“For us it’s not an ‘end-of-year tour’,” Coetzee said before the squad left.

“We have our own buzzwords because we are building for next year and the year after that.”

While Lions flanker Kwagga Smith’s Man-of-the-Match performance in the Barbarians’ 31-22 defeat to the All Blacks at Twickenham would not have gone unnoticed by Coetzee, the focus would be to start the tour well.

“We need to start winning regularly away as a group,” he said.

“Ireland will be a much different prospect this time round. It’s not at the end of their year but the beginning.”

As head coach, Coetzee felt it was important to know when to simply hang in and when to keep it marginal.

“That’s one thing I’m not worried about now, the synergy, the fitness and the plan,” he said.

After missing the last Test against New Zealand due to compassionate leave, prop Beast Mtawarira was set to return for his 96th cap, though his comeback was at the expense of in-form player Steven Kitshoff.

At tighthead Coenie Oosthuizen might also be back for Ruan Dreyer, while the addition of Wilco Louw could add great depth to the bench.

In midfield, Coetzee must decide between Lukhanyo Am or Damian de Allende to fill the void left by Jan Serfontein, starting next to Jesse Kriel.

There may also be extra needle in the Boks’ game with South Africa being named as preferred hosts for the 2023 World Cup ahead of France and Ireland last week.