There's been rumours the burly centre would switch to wing to offset the franchise's loss of two Bok finishers for the start of Super Rugby. 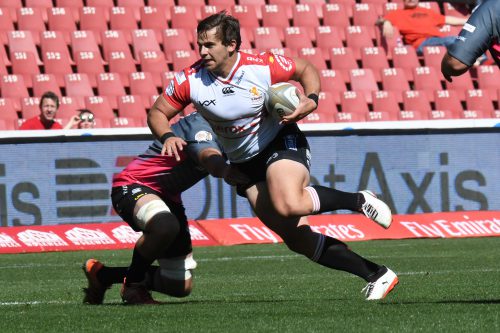 The Lions are weighing up their wing options cautiously before the Super Rugby kick-off next weekend against the Sharks.

While they received the news that Courtnall Skosan might return earlier than the six months which was initially feared after injuring knee ligaments in training, they still have plenty wing options, said coach Swys de Bruin.

“Courtnall will see the specialist again on Thursday and then we will know more, but we are looking now at two and a half to three months.”

But De Bruin said he doesn’t want to speculate about moving centre Rohan Janse van Rensburg to the No 14 jersey.

“I see there has been a lot of talk over such a move but I’m not really feeling comfortable with such a change, but it always remains an option,” he said.

With Skosan and fellow wing Ruan Combrinck out until April, that could see Lionel Mapoe, Madosh Tambwe and Sylvian Mahuza considered at 11 and 14.

De Bruin said shortly after their return from a short training camp in Secunda that he is happy with where they are with their preparations for the competition opener.

“I must say the camp was very enjoyable, we managed to achieve a lot and the guys are all pumped up for the season lying ahead,” he said.

The other injury concern the Lions have is the belated return of explosive flanker Jaco Kriel after shoulder surgery late last season.

“Jaco is doing great with his rehab programme and at this stage we are targeting his return to come around the fourth game which will maybe come against the Blues or Sunwolves at home,” said De Bruin.

After hosting the Sharks in the opener, the Lions face the Jaguares next, also at Ellis Park, before gearing up for the first away game against the Bulls at Loftus.