The strapping Lions flanker admits he has much to learn in the position but that won't stop him from trying to become the best. 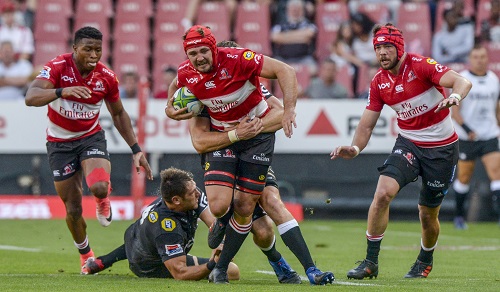 What’s the difference between the No 6 and 7 jersey?

Quite a bit believes Lions flanker Cyle Brink, who has been used in both positions already this season.

The strapping 24-year-old has, traditionally, more of the build of a ball-carrying enforcer in the blindside position.

Yet if coach Swys de Bruin’s team for Saturday’s Super Rugby meeting with the Blues at Ellis Park is anything to go by, Brink is going to have to settle at No 6.

The openside role is traditionally designed for fetchers like All Blacks legend Richie McCaw or nippy Bok Heinrich Brussow, while the No 7 is more designed for a taller flank and an extra lineout option.

However, as the Bulls’ Roelof Smit has shown, size need not prevent a flank from being a pest at the breakdowns.

“Look, playing at 6 is a lot more different than playing at 7. You’re obviously working more towards the ball,” said Brink.

“You have to be a lot fitter to play the No 6 position, luckily we had a good pre-season and it has showed.”

“It’s more of a carrying role and I prefer it, but wherever they need me to play at, I will,” he said.

After all, when the national coaching staff under Rassie Erasmus give their blessing to Franco Mostert moving into the blindside position from lock, there’s not much one can do.

Instead of being disappointed, Brink endorses the switch, stating Mostert “adds value” in his “new” position.

“We might see a bit more of Franco at 7 and adjust the other loosies accordingly. It’s all about targeting the lineouts and bringing more weight in at scrum time,” he said.

“It is great to always get some game time. Personally I don’t think I am where I need to be yet.

“I really want to get into better positions to carry a bit more and also be a bit stronger at the breakdown points, especially when it comes to my timing.”

All’s well when ‘Boeboes’ doesn’t talk to the coach