A visibly moved Victor Matfield, below, never in his wildest dreams thought that upon his Springbok return he would also be honoured by leading the side. 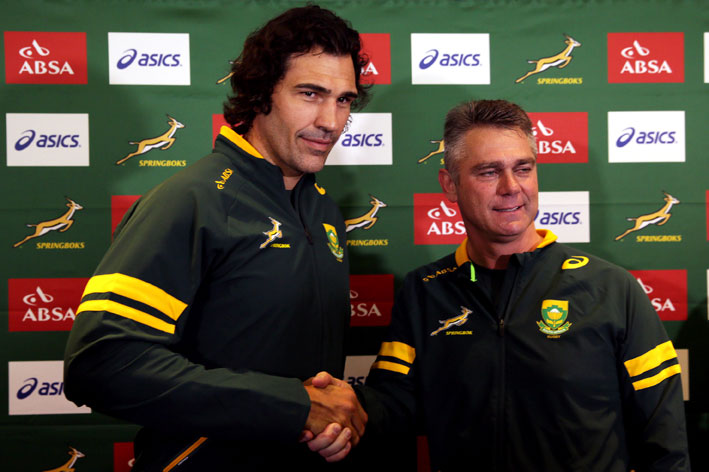 FILE PICTURE: Springbok coach Heyneke Meyer and captain Victor Matfield pose for photographs at a news conference in Cape Town on Tuesday, 3 June 2014. Matfield will captain the Springboks in the Castle Lager Incoming Series this month in the absence of the injured Jean de Villiers. Picture: Nardus Engelbrecht/SAPA

Crediting coach Heyneke Meyer for his return, the second most experienced Bok after former captain John Smit with 110 Tests, Matfield will captain the Boks for the 18th time this weekend at Newlands against the World XV.

At 37, his return was met with disbelief after an absence of three years after he retired following the Boks’ exit at the 2011 World Cup, but he continued to prove the critics wrong. And he has accepted that he will only be interim captain in the absence of the injured Jean de Villiers who will return for the upcoming four Tests.

“When I decided to return to playing rugby, my aim was to be good enough to make the Springbok team. I never dreamt of leading the team again and it’s a massive honour,” Matfield said yesterday in Cape Town.

“We’ll have Jean and Adriaan back soon, which will add to the depth of leadership.”

Meyer said Matfield was a logical option – he knows the pressure associated with being Springbok captain as he’s been there before and he has vast captaincy experience at all levels of the game.

Meyer said Matfield was one of three strong candidates, with the others being hooker Bismarck du Plessis and experienced scrumhalf Fourie du Preez, who will now act as vice-captains.