The never-say-die belief is what saved the Springboks from defeat against Wales at the weekend, said prop Jannie du Plessis. 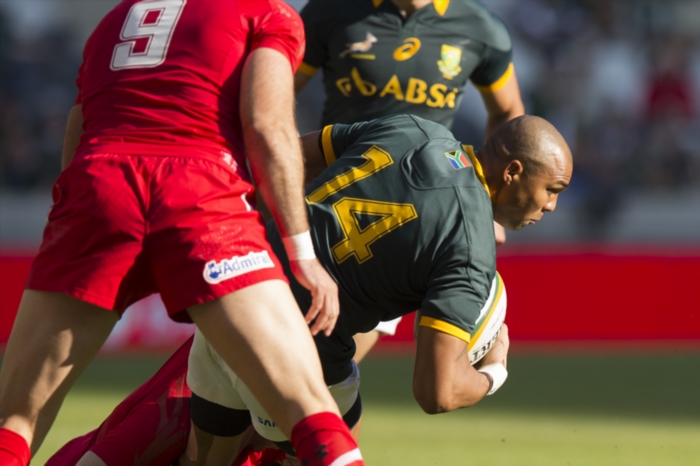 Cornal Hendricks of South Africa during the 2nd test match between South Africa and Wales at Mbombela Stadium on June 21, 2014 in Nelspruit, South Africa. (Photo by Manus van Dyk/Gallo Images)

Although many would view the Boks 31-30 triumph as a hollow victory that depended on a late referee call, Du Plessis said they never gave up hope.

“I think what was great about the result was that the boys never panicked,” said Du Plessis after the Test.

“We really believe in the guy next to you to trust him when the chips are down and in the end I think we really believed we can still pull it off,” he said.

After being dumbstruck by two Welsh tries early in the first half, the Boks hit back with a penalty try and two great scores by wing Cornal Hendricks and fullback Willie le Roux.

“Ideally we want to go out every weekend and win by 60 points and smash opponents, but it doesn’t always work out that way,” said Du Plessis.

“Sometimes you have to go and grind out a win and I think that’s what happened on the weekend,” he said.

While the Boks probably were caught off-guard by the ferocious approach by Wales, Du Plessis said he always got the feeling that the team was busy finding their feet after the shaky start.

“The fire stayed in their eyes and in those last few minutes we managed to score two tries in the space of five minutes, which says something about the composure and confidence of this team,” he said.

“In the final moments of the game, however, I didn’t hope for a penalty or even thought one would be awarded, I actually thought Victor (Matfield) would go for another lineout and hopefully set up the winning try by mauling it over.

“But I really get stomach ache if I have to watch proceedings from the sideline,” said Du Plessis after he was replaced by Coenie Oosthuizen in the final quarter.”