Bok spirit a massive plus – Vermeulen

Abrasive Springbok No 8 Duane Vermeulen believes the resolute spirit in the side augurs well for the Scotland Test this weekend. 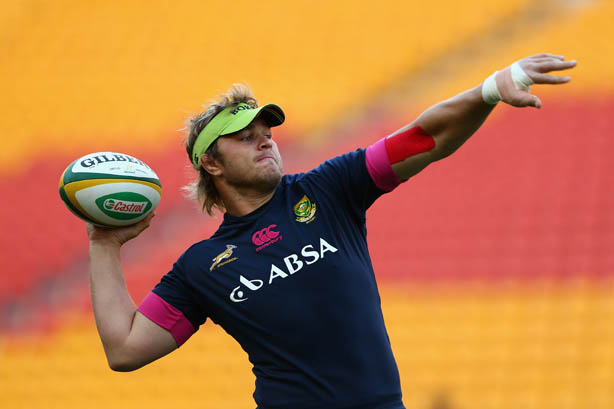 Vermeulen revealed how captain Victor Matfield called them together as they were staring down the barrel against Wales in Nelspruit last weekend.

Being 13 points down and with less than 10 minutes left the Boks had to grit their teeth to eventually score a fortunate 31-30 win.

“It’s no big secret what Victor told us, he simply said there’s time left and that we could still pull it off,” said Vermeulen. “We had to trust our structures, work together and cut out the silly mistakes.”

The Stormers No 8, who scored his second Test try the previous week in Durban, said it was probably one of the toughest encounters of his 18 Test matches.

“Their defence was right up there in our faces the entire game. They were hugely physical and were no doubt the top team on the day,” he said.

“I think it was fantastic for our team morale that we were able to come back and clinch the Test at the end when we were so far behind early in the game and also towards the end.”

Vermeulen is bound to form a new-look loose trio for this weekend’s Scotland Test in Port Elizabeth with flank Francois Louw one of the seven overseas-based players having returned to their clubs while Willem Alberts also had to leave proceedings early after taking a hard knock.

Centre JP Pietersen said it was difficult to predict whether he will focus on the No 13 position after playing wing for most of his career.

“I’ll play wherever the coach picks me and I believe that as a backline combination, we certainly put our hands up in the two Tests against Wales, but there are certainly still areas where we can work on and where we can improve,” he said.

With left-wing Bryan Habana not available for this weekend, Pietersen could find himself on the wing once again, while S’Bura Sithole or JJ Engelbrecht could come into the midfield to partner Jan Serfontein.