Unlike his fellow overseas-based teammates, the tighthead prop competes in a position with a lot of depth and is willing to prove his worth. 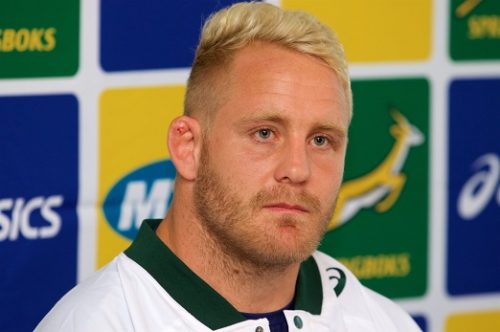 When it comes to Faf de Klerk, many rejoiced that the Springboks’ 30-cap rule for overseas-based players was relaxed.

After all, depth at scrumhalf remains dangerously thin at national level.

But don’t expect the same reaction for Vince Koch.

ALSO READ: Do the Boks and Wallabies bring out the worst in each other?

Bok coach Rassie Erasmus sprung a mild surprise when he included the 28-year-old prop, a star for English club Saracens, for the remainder of the Rugby Championship campaign and for advocates for the 30-Test regulation won’t be too chuffed.

To his credit, Koch acknowledges he’s wiggled his way into a position that’s cluttered.

“It’s a good problem to have,” he said on Tuesday.

“Those are all world-class players and I’m sure any coach would love to be in a position where he has those players at his disposal.

“It’s definitely going to be a challenge as far as getting a start is concerned, but we’re all mates and we will push each other to the next level. That can only be a good thing for the team.”

What Erasmus can bank on though is that Koch will do everything in his power to stake his claim for a spot.

Hard work is one thing his stint in London to date has “forced” on him.

“I’ve grown mentally as well as physically since I moved overseas. Saracens have taught me to work harder, and perhaps I wasn’t working as hard in the past. Whether it’s my scrummaging or my work off the ball, I’ve become a better player since making the shift,” said Koch.

“This is another opportunity. I want to play for the green and gold again, and I will do everything I can to get that chance.”