Back in the Currie Cup after a four-year absence, the Springbok flyhalf is tasked with leading the men from Ellis Park to glory in the domestic competition. 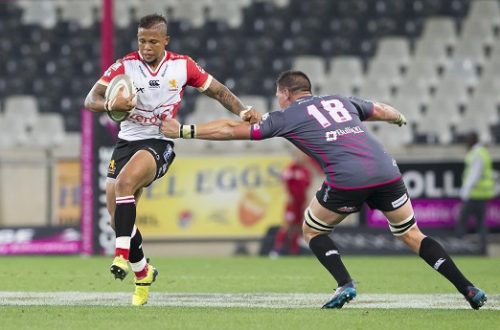 Elton Jantjies of the Xerox Golden Lions and Stefan Willemse of the iCollege Pumas during the Currie Cup match between iCOLLEGE Pumas and Xerox Golden Lions XV at Mbombela Stadium on October 12, 2018 in Nelspruit, South Africa. (Photo by Dirk Kotze/Gallo Images)

Finishing third in the table, the Lions set up the first playoff clash against the Sharks in Durban on Saturday by beating the Pumas 33-21 in Nelspruit at the weekend.

They will turn out as the underdogs for a place in the final, however, after losing 37-21 to the Sharks at the same venue just a few weeks back.

“Getting Elton back was of course huge for us,” Van Rooyen said.

“The energy he has brought with him to the side and the composure he is showing is great, and obviously we were looking at him to make a big difference.

“But also the focus at training the week before was to be more clinical and more physical because it was a big Puma pack we were facing.”

With the Lions pack expected to be put under huge pressure this weekend, Van Rooyen said the talk last week in conjunction with forward coach Philip Lemmer was to stick to their processes and game-plan.

“That’s why we went into the game with five forwards on the bench, exactly for that reason. We expected a big forward battle.

“We knew the Pumas would be desperate as it was basically a quarterfinal, which set the game up as a good battle.”

Pumas coach Jimmy Stonehouse said the Lions had capable backs and a solid pack, but he thought their backs would carry the visitors.

“Their strength is to throw the ball around with their speed and put the chip-kicks and grubbers in behind our defence,” Stonehouse said.

“For both sides it was very important and we were trying to keep it simple and minimise the mistakes, and we thought if the set-pieces were going to plan it could have gone well.”