It had been expected that the nippy halfback wouldn't play on the year-end tour, but also raises questions about how depth in the position is going to be built. 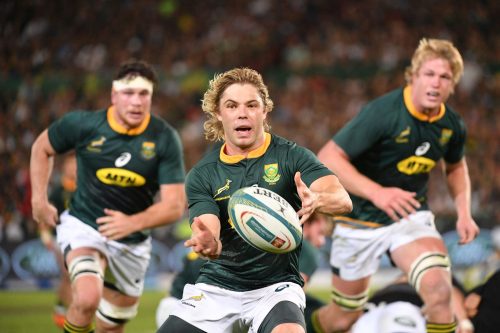 The Springboks received a major boost ahead of Saturday’s meeting with France in Paris after SA Rugby confirmed that Faf de Klerk is available for selection.

It’s undoubtedly an unexpected turn of events after the diminutive scrumhalf had been initially left out of the original tour squad due to his commitments to English club Sale Sharks.

BREAKING: @fafdeklerk has joined the Springbok squad in Paris and is available for Saturday's Test against @FFRugby at the Stade de France. More to follow. #boksontour #LoveRugby pic.twitter.com/lWNDLzzT4E

Reports had stated his absence from the year-end tour would’ve been a trade-off for being available for the whole of the Rugby Championship campaign.

But it would seem that national coach Rassie Erasmus has exploited Regulation 9, the rule that states any player must be released from club duty should he be called up during an international window.

All overseas-based players were unavailable last weekend, but that didn’t stop the Boks from naming Willie le Roux, Franco Mostert and Francois Louw in the tour squad.

“It’s good to welcome Faf, Willie, Cheslin and the others back into the squad,” said Erasmus.

“They bring along some valuable experience and knowledge of the European conditions and we are looking forward to working with them again.”

Last week, he was named as one of the nominees for World Rugby Player-of-the-Year, attesting to his standing.

It will also lessen the burden on the three other scrumhalves – Ivan van Zyl, Embrose Papier and Louis Schreuder – who have a combined 10 caps between them.

However, De Klerk’s inclusion will once again raised questions over how Erasmus plans to build depth in a what is clearly a problematic position.

How can a talent like Papier, whose snappy service at Twickenham as replacement was a highlight, flourish without proper game-time?

“We will give Eben time until Tuesday to prove his fitness,” said Erasmus.