Mbonambi the hero as wayward Boks steal a win

The underappreciated hooker forms part of an influential trio of replacements that dramatically turned the tide on a frustrating night in Paris. 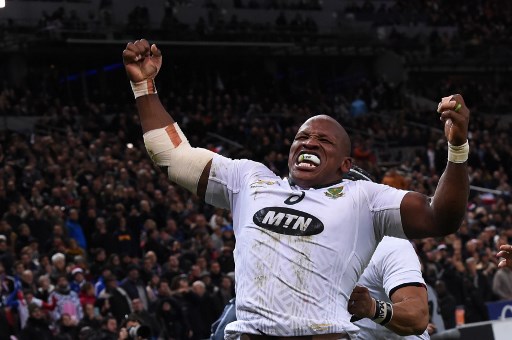 South Africa's hooker Bongi Mbonambi celebrates after scoring a try during the international rugby union test match between France and South Africa at the Stade de France in Saint-Denis, north of Paris, on November 10, 2018. (Photo by Anne-Christine POUJOULAT / AFP)

A dramatic try by replacement hooker Bongi Mbonambi with the last movement of the game gave the Springboks a nail-biting, perhaps undeserved 29-26 win over France in Paris on Saturday night.

It looked all over for the Boks just moments earlier when a try in the left corner by wing Aphiwe Dyantyi was ruled out because of a clumsy forward pass by fullback Willie le Roux.

But referee Nigel Owens went back to play the previous advantage and it was Mbonambi who rewarded the side for their resilience by peeling off a rolling maul.

That said, the real hero was another substitute in flanker Francois Louw, who secured two crucial turnovers in the last five minutes to get the Boks back in their opponents’ half and launch their comeback.

However, this escape shouldn’t mask the fact that Rassie Erasmus’ troops in general were poor in executing a kick-based pattern and were, for at least 55 minutes, bullied in the collisions by a more imaginative France team.

That doesn’t happen every day of the week.

Mbonambi and Louw could easily stake a claim in this regard, but it was the consistently excellent Pieter-Steph du Toit that shone in this game. He had performed his ambulance job at No 4 with distinction yet it was his switch to blindside flanker later that brought out the best in him. It was his massive tackle that led to S’bu Nkosi’s vital try early in the second half when it seemed South Africa would be fatally out of the reckoning.