The towering lock also hails how well Rassie Erasmus and co are preparing the Springboks for their World Cup assault. 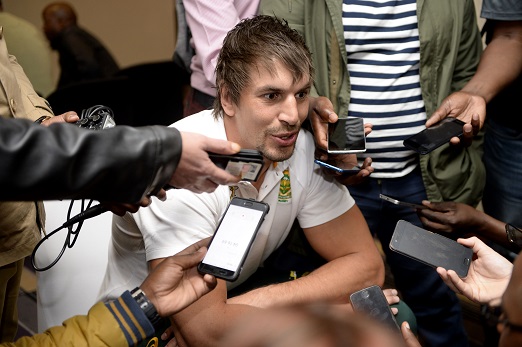 The Springboks are probably the best prepared they have been in years heading into their opening Rugby Championship Test next weekend at Ellis Park against Australia, giant lock Eben Etzebeth believes.

The Boks launched their international season on Thursday with some razzmatazz in Pretoria, with the World Cup and the late James Small squarely in focus.

A moving moment of silence was observed for the 1995 Cup winning winger, who sadly passed away on Wednesday.

While the 27-year-old Etzebeth was just three years old when Small pulled off his heroics, he’s intimately familiar with those exploits having religiously watched past footage.

“A few of my friends and I have a WhatsApp group and we spoke about James. He was one of the reasons why Jonah Lomu never scored a try against the Boks,” he said.

“He always put his body on the line. He was that kind of tough player, an exceptional guy. It’s a sad day for SA and his family and friends.”

Having fully recovered from a hand injury, Etzebeth is in line to captain the Boks next weekend with Siya Kolisi still sidelined with a knee injury.

“Obviously Siya won’t be ready for the next game, but we still have to wait and see who’ll be the captain for next weekend,” he said diplomatically ahead of his 75th Test.

“Every time you put on the Bok jersey it’s special. It’s the reason why I play rugby.”

After three weeks in camp, Etzebeth said everything is looking good – for himself and the rest.

He trained at full intensity this week.

“I only played about seven games in Super Rugby, so I’m fresh and excited for the Bok season coming up.

“We have been training hard and all the guys are really excited and ready to go. We’re also hoping to get game fitness to the required level quickly. It’s not just the time we have spent in camp that’s been great, but the quality of work being put in by the coaches and input from the senior guys. The information we’ve received has been fantastic and the prep on the field and conditioning is going well.

“I think we should be really well prepared by the time the World Cup comes around.”