The playoff games will be contested at Loftus Versfeld and Newlands respectively, kicking off at 2pm and 4.30pm. 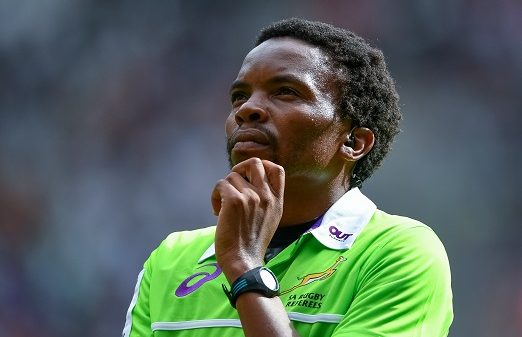 Rasta Rasivhenge, pictured, and Marius van der Westhuyzen will be in charge of the Currie Cup semifinals this weekend. Picture: Getty Images

Rasta Rasivhenge and Marius van der Westhuizen will hold the whistle in the Currie Cup semifinals on Saturday in Pretoria and Cape Town respectively.

Rasivhenge will have AJ Jacobs and Griffin Colby by his side as Assistant Referees in the match between the Bulls and Lions at Loftus Versfeld at 2pm, with Marius Jonker performing the Television Match Official (TMO) duties.

Van der Westhuizen, meanwhile, will take charge of the semifinal between Western Province and the Sharks at 4.30pm in Cape Town, and will be assisted by Cwengile Jadezweni and Aimee Barrett-Theron, while Stuart Berry has been appointed the TMO.

Both matches will be broadcast live on SuperSport.

Rasivhenge has taken charge of two previous Currie Cup semifinals – 2016 and 2017 – while Van der Westhuizen has held the whistle in three semi-finals in 2013, 2016 and 2018 respectively

REVEALED: Why Duane Vermeulen decided to leave the Bulls
1 week ago
1 week ago

REVEALED: Why Duane Vermeulen decided to leave the Bulls
1 week ago
1 week ago