White said he was particularly pleased that he was able to rely on his senior players to step up when the pressure was on. 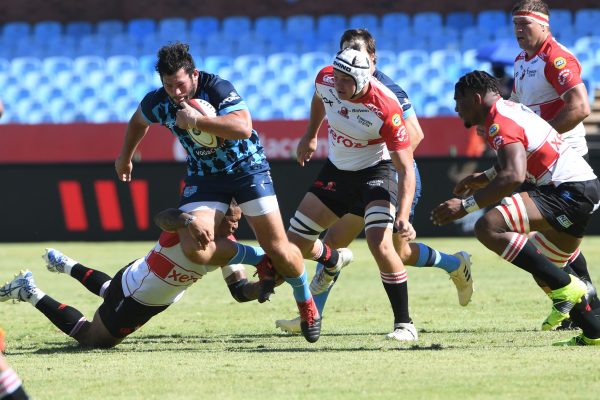 Mornay Smith of the Bulls charges forward during their Currie Cup semifinal against the Lions. Picture: Gallo Images

Coach Jake White says something special is happening in the Bulls camp and he warned the Sharks that their Currie Cup semifinal win over the Lions was “patchy”, so he is expecting his side to be even better in this weekend’s final in Pretoria.

The Bulls saw off the Lions 26-21 in their semifinal at Loftus Versfeld at the weekend, but they had to regroup after the Lions levelled the game after 47 minutes, wiping out a 14-0 lead for the home side.

“Some sides would have panicked going from 14-0 up to 14-14, but we managed to regroup and showed lots of composure. Some of our players had not played for four or five weeks, so it was understandable the performance was a bit patchy. But it’s nice to win comfortably even though the opposition scores at the death.

“The bench was solid and I have a lot of confidence using them. The team is in a good place and we absorbed plenty of pressure, we defended well. We will get confidence from beating the Sharks both times we have played them up here this season and there is an unbelievable vibe in our team. They’ve worked hard and they enjoy their time together. It’s an unbelievable group of players and special things are happening in this team,” White said after the semifinal.

White said he was particularly pleased that he was able to rely on his senior players to step up when the pressure was on.

Springbok tighthead Trevor Nyakane, ably supported by loosehead Lizo Gqoboka, put the Bulls on the front foot in the scrums, Duane Vermeulen, Ivan van Zyl and Morne Steyn provided the tactical nous to ensure that pressure was kept on the Lions.

The wonderful direct running of Cornal Hendricks at inside centre, constantly straightening the line, also gave the Lions plenty of problems on the gain-line.

“It was great to see those senior men lift their game to a higher level. At crucial times, that’s what you want from your best players, that they can lift their game to another level. I was very satisfied with the effort of Trevor and Lizo up front, especially because if you compare today with the last couple of matches, there were lots of questions over our scrum.

“And one should not underestimate what a good captain means to a team and Duane was outstanding today. Not just because he played very well and had a physical impact, but also because of the way he spoke to the players after we were 14-0 up and then suddenly it was 14-14,” White said.

“He still stayed calm and it was unbelievable to see the determination everyone showed because everyone was tested.”