Jantjies pleased to be back in the heat of the action

The Lions are next up against the Stormers in Cape Town this weekend as the Preparation Series comes to an end. 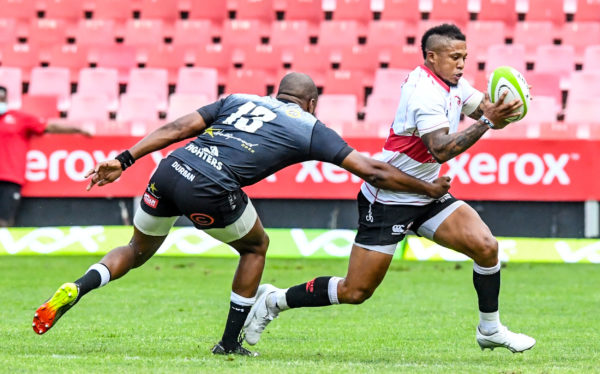 Lions No 10 Elton Jantjies said it was enjoyable being back out on the field after a few weeks off. Picture: Sydney Seshibedi/Gallo Images

Lions captain Elton Jantjie admitted there was a bit of rust in his game after not playing for a few weeks following his team’s Preparation Series win against the Sharks at Ellis Park on Saturday.

Jantjies though produced some great touches and had a hand in several of the six tries scored by the Lions, who had to dig deep at the end to produce a winning 43-40 result.

Known to be fairly hard on himself, Jantjies said he would do a review of his, and the team’s, performance with Lions head coach Cash van Rooyen and Preparation Series coach Mziwakhe Nkosi.

“I’ll have a chat with Cash and coach Mziwakhe about my game,” said Jantjies.

“I will review my own game. There were a few mistakes but it’s part of rugby.”

The Lions played some delightful rugby in the first half and the try scored by fullback Tiaan Swanepoel after a counter-attack from inside their own half was simply outstanding.

“It was nice, I really enjoyed it,” said Jantjies.

“We pride ourselves in playing at a certain tempo and in patches we did that,” added the No 10. “In the first half it was pleasing to see that we could score some long-range tries.”

While the defence wasn’t always top-drawer as 12 tries were scored it served as a good hit-out in preparation for the final match in the series against the Stormers in Cape Town this weekend.

Jantjies said it was “enjoyable” to be out in the heat of battle again, following a few weeks off.

“It was nice to be out there after a few weeks, it was enjoyable,” he said.