Lions fight back to edge Springboks in first Test

The visitors came back from a poor first half to dominate the game in the second spell. 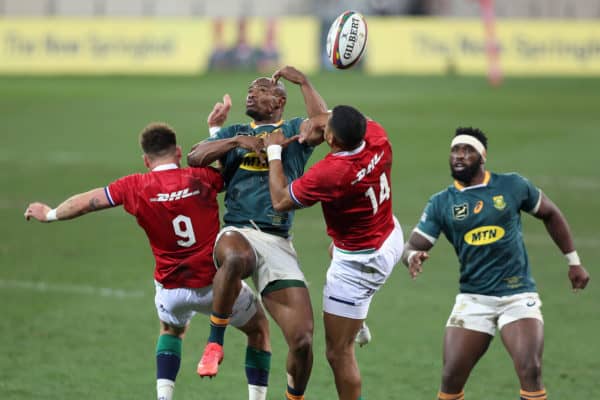 Makazole Mapimpi, centre, of the Springboks jumps for the ball against the British and Irish Lions in the first Test in Cape Town on Saturday. Picture: EJ Langner/Gallo Images

The British and Irish Lions were successfully able to check the Springboks’ momentum in the second half as they turned a 3-12 halftime deficit into a 22-17 win in an enthralling first Test in Cape Town on Saturday.

A focused Springbok side had ticked all the boxes in the first half, putting in an impressively controlled performance considering how much talk there has been about them being underdone. In contrast, the Lions seemed to be the side who were over-excited by the magnitude of the occasion, conceding several penalties.

Springbok flyhalf Handre Pollard gave a polished display and kicked all four of his shots at goal in the first half.

South Africa dominated territory and held on to the ball with composure, building phases and pressure. Their defence was also typically effective and, having taken the 12-3 lead, they had to repel a concerted onslaught from the Lions. They did so, but the Lions also missed a couple of penalties and made other errors that prevented them from closing the gap.

The momentum carried into the second half, however, and the Lions were given a great attacking platform by two soft penalties – Kwagga Smith getting up with the ball after he had been tackled and then a high tackle by Eben Etzebeth, who had been the dominant force around the rucks.

Four minutes into the second half and the Lions had the first try, hooker Luke Cowan-Dickie going over from the lineout drive.

The fire in the Springboks was not quite quelled just yet though and they roared back with Damian de Allende dotting down in the corner, but the try was disallowed because the TMO ruled he was in front of the kicker.

But two minutes later, TMO Marius Jonker awarded the try after Pieter-Steph du Toit had picked up a wayward pass, burst clear and passed out wide to Makazole Mapimpi. Du Toit then attempted to collect the wing’s deft kick infield, but seemed to over-run the ball, with scrumhalf Faf de Klerk then picking up and scoring. Jonker ruled that Du Toit’s hands had missed the ball, which bounced off his leg.

In both cases, replays suggested the under-pressure South African TMO was quite correct.

Pollard crucially missed the conversion and it was the first sign that the Boks were starting to flag, to lose their intensity.

Lions back to basics

The Lions went back to basics, adopted the tactics associated with the Springboks – the box-kick and the rolling maul – and the home side were not able to handle their own weapons being turned against them. The territory statistics turned around totally.

The pressure led to a trio of penalties kicked by Dan Biggar, in the 52nd, 57th and 63rd minutes. The coup de grace was landed by replacement Owen Farrell, with a penalty two minutes from full time.

The failure of the bench to make much impact will probably be the biggest concern for the Springboks, seeing as though it was the key component of their World Cup triumph.