Bok assistant Davids hints Ox could be successor to ‘Beast’

"For a relatively new guy like Ox to perform like that was exceptional," said the Bok coach after the first Test. 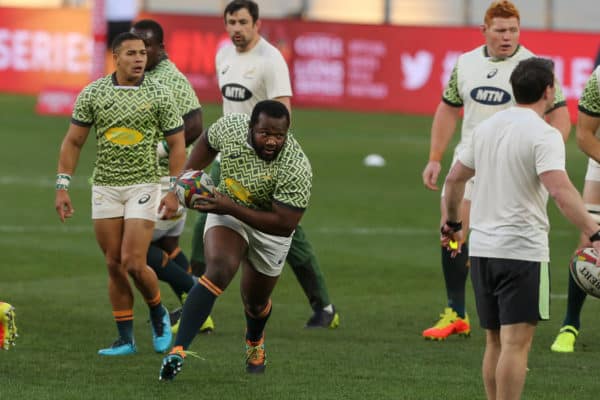 The loosehead prop was outstanding in the first half of a 22-17 first Test loss to the British and Irish Lions in Cape Town last Saturday.

Many Springbok supporters were shocked when Nche was substituted at half-time, but Davids explained during an online news conference on Monday that the forward was suffering from a sore neck.

The entire front row was changed during the break and hooker Bongi Mbonambi did not reappear because he had a hamstring problem, said Davids.

“For a relatively new guy like Ox to perform like that was exceptional. It just shows the depth of our talent.

“Ox and his fellow front rowers delivered exceptional performances. But at half-time the medical and conditioning staffs were alerted to a few niggles.

“He complained of a sore neck and Bongi had a hamstring problem. With those things in mind, we made the decision regarding what was the best thing to do.”

ALSO READ: Springboks believe they can hit back against Lions

Zimbabwe-born Mtawarira was the first choice loosehead for many seasons before retiring after helping South Africa win the 2019 Rugby World Cup in Japan.

Throughout the World Cup campaign then head coach Rassie Erasmus used a six-two forwards-backs split on the bench, meaning he could replace virtually the entire pack during the second half.

But the tactic, popularly known as deploying the ‘bomb squad’, did not work against the Lions with replacements Steven Kitshoff, Malcolm Marx and Frans Malherbe not having the anticipated impact.

Speaking to reporters on Monday, Kitshoff said the South African front row struggled to adapt to how quickly Australian referee Nic Berry called for the ball to be put into scrums.

“There were calls of ‘use it’ when Frans and I felt like we had a bit of go-forward or started to feel the cracks and then the call came from the ref.

“I understand the referee does not want resets so it is part of the game and we just have to find solutions to get that go-forward a bit quicker.”

The second Test is scheduled for this Saturday and the third for August 7 with both matches to be played behind closed doors in Cape Town because of the coronavirus pandemic.