The home team, who scored six tries to the one by the visitors, made it back-to-back wins after winning the delayed 2020 final in January. 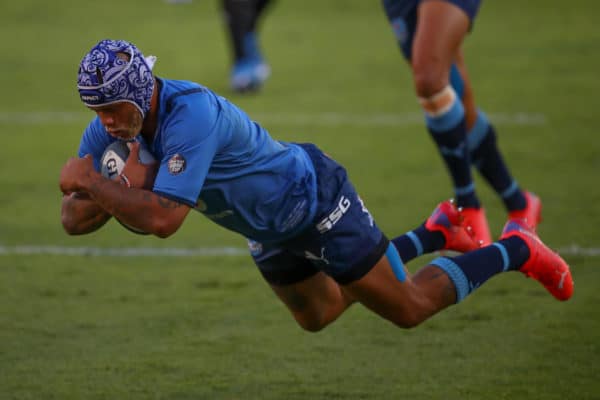 Bulls centre Lionel Mapoe goes over for a try in the Currie Cup final against the Sharks at Loftus Versfeld ion Saturday. Picture: Gordon Arons/Gallo Images

They say it’s not the size of the dog in the fight that matters but the size of the fight in the dog, but the Currie Cup final was like Alsatians versus Poodles as the Bulls simply bullied and battered the Sharks into submission, winning 44-10, the biggest winning margin in the history of South Africa’s premier domestic final.

The Bulls only really bared their teeth in the second half, but their snarling, immense defence was the stand-out feature of the first half. Despite the Sharks dominating territory and possession, the Bulls scored tries on three of their four visits to the visitors’ 22, to enjoy a handsome 19-3 lead at halftime.

The tone was set for the first half from the outset as the Bulls received the kickoff and then had to defend for 12 phases before winning a turnover penalty. From the lineout, centre Harold Vorster burst straight through the midfield and dashed over for a try from 40 metres out.

The contrast in defences couldn’t have been more stark: The Bulls barely conceded an inch on the gainline, while the Sharks were ripped asunder from first phase with ease.

The Bulls’ second visit to the Sharks’ 22 came in the 23rd minute and this time Vorster was the provider with a lovely little pop-pass for his outside centre Lionel Mapoe to go slicing through for a try, again straight from a lineout.

The Sharks were eventually on the board after half-an-hour through a Curwin Bosch penalty, but it took 10 phases of attack that made very little headway, to get it. The Bulls quickly struck back with a try for captain Marcell Coetzee, bulldozing over from close range with fellow flank Arno Botha at his back.

The Bulls called their kicking game more into service in the second half and it brought good rewards for them as fullback David Kriel and wing Madosh Tambwe were outstanding in the air.

Lock Janko Swanepoel had ruled the lineouts with Ruan Nortje and he deservedly crashed over for a try, followed by a nifty snipe-and-score by scrumhalf Zak Burger.

By now the Sharks were creaking in all facets – their scrum was being dominated, their lineout was not working and it really seemed like men against boys.

Prop Thomas du Tot was gifted a try from a Bulls lineout that went astray, but the home side rightly had the final say and there was no more popular try-scorer than wing Cornal Hendricks. He kicked through after wing Thaakir Abrahams grubbered into Mapoe, regathering brilliantly and diving over for the sixth and final try.

The 34-point winning margin beat the previous record of 30 points set by their Northern Transvaal predecessors when they beat Western Province 39-9 at Loftus Versfeld in 1980.