No time for emotion, says Davids, as Boks search for solutions

The Springboks’ very specific game plan needs multiple facets of their play to be working like clockwork. 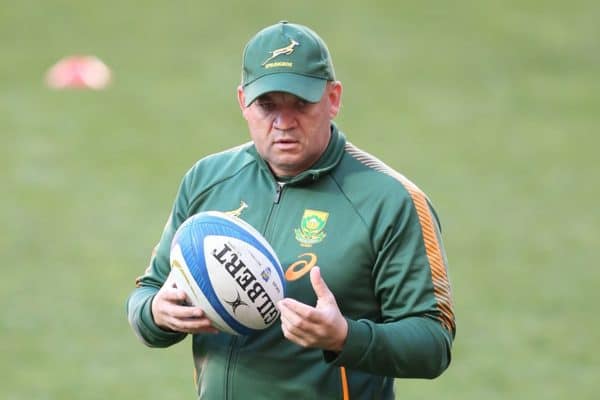 The harsher critics of the Springboks are having a field day saying their reign at the top of the rugby world is going to the dogs, but assistant coach Deon Davids said on Monday that the team needed to take the emotion out of their review of back-to-back defeats against Australia as they prepare to face the mighty All Blacks this weekend.

The Springbok game plan has been the object of much derision from their rivals who could not prevent them winning the World Cup, as well as seeing off the British and Irish Lions. But a strangely flat performance in their latest Rugby Championship match against the Wallabies at the weekend, leading to a 30-17 defeat, raised questions about how keen the Springboks are to keep chasing and tackling themselves into oblivion.

ALSO READ: Boks have a lot of problems to fix after two sloppy defeats

“We will be the first to say our performance has not been up to standard in the last two games and we need to look at the reasons for that, but it’s important to look objectively at our performance. We want to take the emotion out of it as quickly as possible,” Davids said.

“We need to look at how the plan was executed… (but) we can’t dwell on things that are in the past. We have to focus on what we need to improve and what we need to do, and then prepare effectively to make sure we perform the way we need to.

“Obviously when you lose two consecutive games, it’s natural to get emotional and you can look for reasons that are not actually the case. We need to go back to our strengths.”

The Springboks’ very specific game plan needs multiple facets of their play to be working like clockwork and Davids is confident they can regain the required cohesion and fervour against the All Blacks for the 100th Test between the two great rivals, in Townsville on Saturday.

ALSO READ: The United Rugby Championship – All you need to know

“Against New Zealand, we’ve got to be good in all areas, especially technically, but this group of players has been in this position before. They lost the first Test against the Lions and their first game at the World Cup, but they were able to pick themselves up because there’s a lot of experience in the team.

“I’m confident we will be back at the standard we are used to, even though there are physical and mental challenges due to the circumstances caused by Covid, which will have some sort of effect. But we had an idea of the challenges before we started this campaign and we prepared to adapt to circumstances.

“There is nothing standing in the way of us giving our best in these next two weeks.”