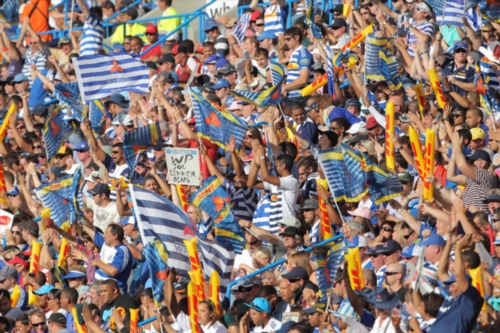 Province had to withstand a strong second-half fightback from the Lions in the Currie Cup final at Newlands today before claiming their first title at Newlands since 2001 with a nail-biting 19-16 win.

With time finished on the clock Lions flyhalf Marnitz Boshoff had the opportunity to level the scores and send the game into extra time but the strong wind pushed his kick wide and the WP players couldn’t contain their delight.

It was the normal accurate Boshoff’s fourth missed while Ruan Combrinck also pulled one of his two attempts wide.

After the scores were tied just minutes earlier, Province flyhalf Demetri Catrakilis scored two crucial penalties in the 60th and 67th minutes to give Province the lead back at 19-13.

Boshoff hit the upright with a penalty just two minutes later in the strong south-easter, to signal his third miss of the final.

With just five minutes left on the clock the 44 505 strong crowd were more quit when Lions wing Ruan Combrinck kicked a penalty against the wind to reduce matters to only 19-16.

Earlier Combrinck took over the goal kicking duties from Boshoff but he also missed a penalty on the stroke of halftime to see Province go into the den being up 13-0, after Province centre Jaco Taute scored the first try of the final in the 36th minute.

Thirteen unanswered points by the Lions in the 18 minutes after halftime turned the match on its head with the scores levelled at 13-13 after Province still lead 13-0 at half-time.

The Lions started to turn their fortunes around when fullback Jaco van der Walt crashed over in the 50th minute for the visitors first try and when Boshoff converted it was only 13-10 to Province.

Early in the game Province were first on the board when Catrakilis made it 3-0 in the third minute after the Lions transgressed.

Six minutes later Catrakilis striked again to make it 6-0, this time for an off-side call against the visitors, while the Lions’ Boshoff missed twice with penalties in the 14th and 32nd minutes.

While the Lions struggled to come to terms with the brutal defence of Province where flankers Rynhardt Elstadt and Michael Rhodes were prominent, they were also partly countered at scrum time by the home side.

The Lions initially won two scrum penalties and referee Craig Joubert ordered several rest scrums thereafter as the Lions struggled to make their way back in the game.

The Lions eventually got on the board in the 45th minute when Boshoff kicked a penalty in his third attempt for the Lions to trail 13-3.