The Bulls will be playing Cardiff on the high-tech 4G, artificial turf pitch at Arms Park this weekend. 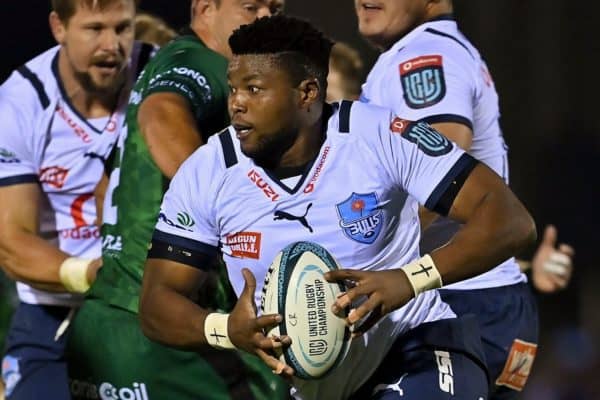 Lizo Gqoboka is always smiling, but if one had to offer the Bulls prop a penny for his thoughts after their loss to Connacht last week, he would have shared his bitter disappointment, even though he scored a try and put in a stout individual performance.

“It was a tough one. I was happy about the try, but we lost the game, so actually I was not happy. The team comes first and I can never be happy when we lose,” Gqoboka said this week, as the Bulls aimed to rectify the mistakes they made in their 34-7 loss to Connacht ahead of their United Rugby Championship match against the Cardiff Blues on Saturday night.

“There are a couple of things we need to adjust to, mostly the conditions and the tempo. These European sides play differently and they are accurate in their execution.

“We need to adjust and learn really quickly how to counter that tempo, but the focus is on ourselves and making sure we continue improving. Our attitude as Bulls is not to complain, but to adapt and grow.”

While the match against Connacht was played at the old-fashioned Galway Greyhound Stadium (capacity 8129), which is open and allows the elements to take full force, the Bulls will be playing Cardiff on the high-tech 4G, artificial turf pitch at Arms Park.

Bulls scrumhalf Zak Burger is a man who knows about playing in small venues, having missed the finer touches of a place like Loftus Versfeld before moving to Pretoria from Griquas.

He was looking forward to showing a bit more daring in better conditions for running rugby.

“A couple of times in Kimberley we would have a 40km/h wind in that open stadium and it made it very difficult in certain corners,” Burger said.

“Connacht used the wind really well last week in the second half and put us under big pressure, but as a scrumhalf I enjoy this 4G pitch in Cardiff a lot. You feel like you are running lighter, so it’s nice to play on.

“I don’t know what the weather will be like on Saturday, but I hope it’s okay. We must use the conditions more and we are not far off.”