The Springbok Test against Ireland in Dublin on Saturday will be preceded by a moment’s silence in honour of five South African sporting icons who recently passed away. FILE PICTURE: South Africa observes a moment of silence with the fans and other teams. Picture: Richard Huggard/Gallo Images

The request for the tribute was made by the Springboks through the South African Rugby Union (Saru) and both the International Rugby Board (IRB) and Irish Rugby Football Union (IRFU) agreed.

“These deaths hit our country hard and we’re grateful to the IRB and IRFU for allowing us to show our respects at the Aviva Stadium on Saturday,” said Saru president, Oregan Hoskins.

Springbok coach Heyneke Meyer said: “Through the deaths of these sporting heroes we saw once again the power of sport in South Africa and from the Springboks, we’d like to pass on our condolences to their family and friends.”

Linee suffered from motor neuron disease and passed away on Monday. Malan, a hooker in his playing days and also a Springbok selector, passed away late last month from complications following knee replacement surgery. 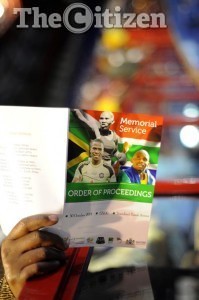 Meyiwa was tragically murdered, a day after Mwelase passed away due to injuries suffered during a boxing match a day after Mulaudzi, who was killed in a car accident.

Play well in URC and Bok door will open, says coach Nienaber
5 hours ago
5 hours ago

Play well in URC and Bok door will open, says coach Nienaber
5 hours ago
5 hours ago