The big lock has had an injury-hit year and also missed the Boks' series against the British and Irish Lions. 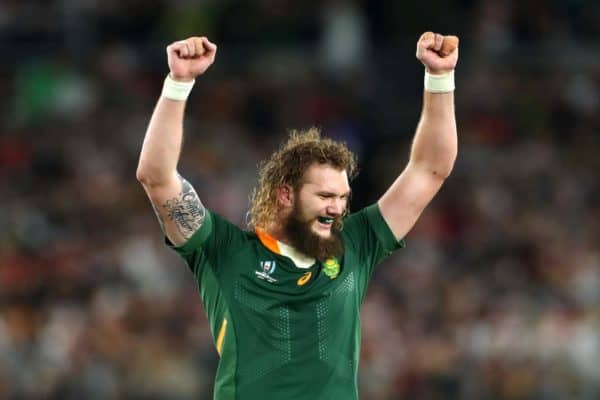 Springbok lock RG Snyman’s injury-plagued year continued at the weekend with the news the towering second-row forward has suffered another injury, which is set to put him out of the game for an extended period.

The 2.06m giant limped off the field after coming on as a second half replacement for Munster in their United Rugby Championship clash with Scarlets on Saturday.

Munster coach, former Springbok assistant Johan van Graan, said the injury was “significant” but he was not willing to say how serious it was and for how long Snyman might be sidelined.

“It looked like it might be significant but I’m not going to comment on it until he’s gone for a scan,” Van Graan was quoted in the Irish Times.

“He’s a very important squad player for us in terms of what he brings. Hopefully we get some good news but it’s difficult to say at this stage.

“After speaking to him in the changing room I’m pretty worried about it.

“If it turns out to be serious, he’s a phenomenal man and he will get through this. The battles that he’s gone through over the last 15 months not a lot of human beings can do that.”

Snyman missed a big portion of the last European season with a serious knee injury and then he underwent a skin graft recently following a fire-pit incident, which ruled him out of the Boks’ series against the British and Irish Lions.

The 26-year-old who has played 29 Tests for the Springboks and was part of the squad that won the World Cup in 2019 returned to action just two weekends ago.

Munster are expected to know more about the latest injury on Monday.

Meanwhile, it has also been revealed that Bok prop Frans Malherbe will also spend a significant amount of time on the sidelines after picking up a neck injury while on duty during the Rugby Championship, according to Rapport. He will miss the Boks’ November tour of Europe.

The Boks are set to play three Tests in Europe next month – against Wales, Scotland and England.