﻿﻿Exposed by intensity at the breakdown and rattled at contact areas an overwhelmed field of Bokke succumbed to a shock 29-15 loss to Ireland in Dublin on Saturday night. 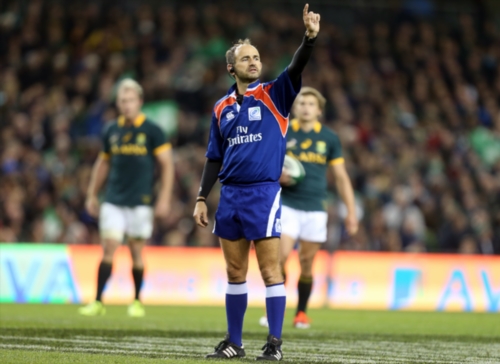 A late consolation try by replacement wing JP Pietersen flattered the Boks’ final tally somewhat as Ireland lead 29-10 as time ran out on the stadium clock in front of the ecstatic Aviva Stadium crowd.

Two crucial penalties by Ireland flyhalf Jonathan Sexton, another by Ian Madigan and a vital try by wing Tommy Bowe in the final 10 minutes took the wind out of the badly outplayed SA sails.

Unfortunately referee Romain Poite had a big influence in matters yet again when he yellow-carded Bok hooker Adriaan Strauss in the 67th minute for taking Ireland fullback Rob Kearney in the air.

There was a flutter of hope for the Boks in the 56th minute when they finally got their first try as flank Marcel Coetzee drove over from a well-constructed maul to cut the deficit to just 13-10.

After leading 6-3 at the break, Irish flank Rhys Ruddock scored the decisive opening try of the game three minutes after the break to put Ireland in a commanding 13-3 lead.

The Irish, who haven’t beaten the Springboks since 2009 when they won 15-10,  enjoyed an energetic start by dominating early territory and possession.

Ireland put the first points on the board through flyhalf Jonathan Sexton in the eighth minute to go 3-0 up after Bok prop Jannie du Plessis conceded a scrum penalty.

Bok flyhalf Handre Pollard pulled his first penalty wide in the 17th minute as Ireland turned on the early screws and the Boks looked pressurised and panicky.

In the 23rd minute Sexton increased Ireland’s lead to 6-0 after fullback Rob Kearney broke the Boks defensive line with some brilliant angled running.

Between the 28th and 30th minutes the Boks forfeited two goalable penalties which turned into nothing as Ireland successfully disrupted the Bok maul.

Francois Hougaards’ fumbling fingers behind the Boks maul as he was exposed to all sorts of pressure from the likes of fiery Ireland No 8 Jamie Heaslip did not help the team.

The Boks finally got on the board in the 38th minute when Pollard goalled his second attempt to trail the hosts 3-6, but the Boks were starting to get phases together while they annihilated the Ireland scrum.