Not the Springboks’ standard, says Jean

Springbok captain Jean de Villiers admitted they were well below their own standards after going down 29-15 to Ireland yesterday in Dublin. 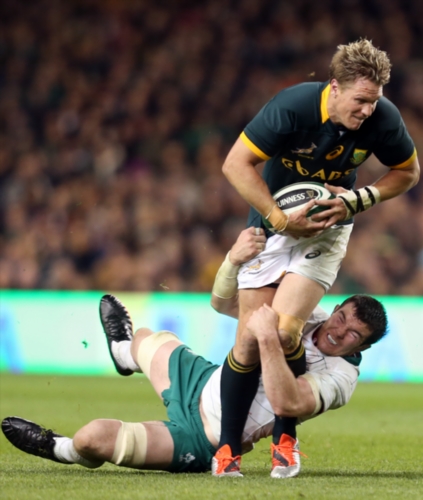 It especially came as a rude awakening after they beaten the mighty All Blacks in their previous Test and they lacked the hunger and intensity of the Irish.

“Each and every player will have to take a hard look at himself, come back on Monday and work harder,” stressed De Villiers after their sluggish performance.

The Springboks travel to London today, where they face England on Saturday at Twickenham.

Many questions have been raised about the Boks’ performance on a day where the All Blacks comfortably beaten England 24-21 and Australia edged Wales 33-28.

“Our standards are higher than what we showed against Ireland and we simply made too many errors,” said De Villiers.

Ireland was tireless in making the Boks’ ball slow despite SA dominating territory and possession later in the game, while Ireland were required to make almost double as much tackles as the Boks.

It was the first loss to a northern hemisphere side for the Boks under De Villiers’ captaincy and Heyneke Meyer’s coaching and the first loss since their defeat to Scotland in 2010.

Questions have also been raised about De Villiers’ captaincy after forfeiting three goalable penalties even though Ireland managed to disrupt the Boks’ maul most of the time.

“Yes, our first phase play was very good and I thought we dominated the scrums and the lineouts, but we didn’t retain the ball and you can’t play rugby without the ball,” conceded the disappointed De Villiers.

Rugby World Cup just two years away, but focus is on the now — Am
16 hours ago
16 hours ago

Rugby World Cup just two years away, but focus is on the now — Am
16 hours ago
16 hours ago