Springbok defence coach John McFarland said this afternoon in London the team have learnt some harsh lessons after being exposed at the breakdowns by Ireland last weekend. 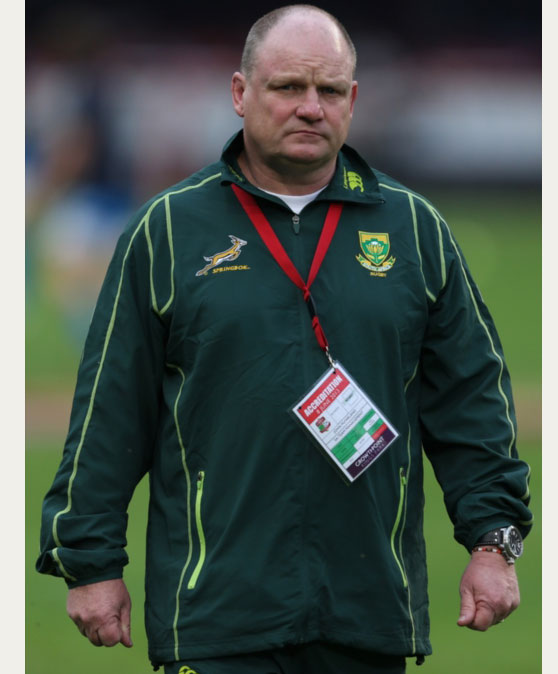 But ahead of facing England this weekend, McFarland hinted that Ireland really pushed the boundaries of the laws and to their credit, got away with most of it.

“They did do that (disrupt our breakdown) quite well, they had numbers on their feet, there’s certainly things we can take from what they did defensively,” said McFarland.

“The reason why they were able to use their rushed defence was because they were disruptive at the breakdown. They ensured out ball was slow and got some leeway in that department.”

And while referee Romain Poite allowed the breakdown to become a free-for-all, the Boks need to take some lessons to heart, said McFarland.

“They pushed that law to the boundaries, we must take some lessons from that, and use it to our benefit.”

“The positive is that they only managed one line break the whole game against us I think that was when fullback Rob Kearney stepped inside, but I think the real thing we must improve on is our positional play. Flyhalf Jonathan Sexton exposed us a few times in the back field we need to be more disciplined in certain situations.

“I think we know we can play a lot better than we did on Saturday, I think it’s up to England to decide what’s good for them this weekend. Maybe they’ve got different personnel, if they play forward it will be a different type of game; I won’t tell them how to play their game.”

“I think Schalk had a real impact when he came on, Jan Serfontein was pretty solid, as was Handre against a very experienced No 10 in Sexton.”