The honeymoon is over for flyhalf Handre Pollard as he became one of five players to be dropped today from the Springbok team to face England at Twickenham on Saturday. 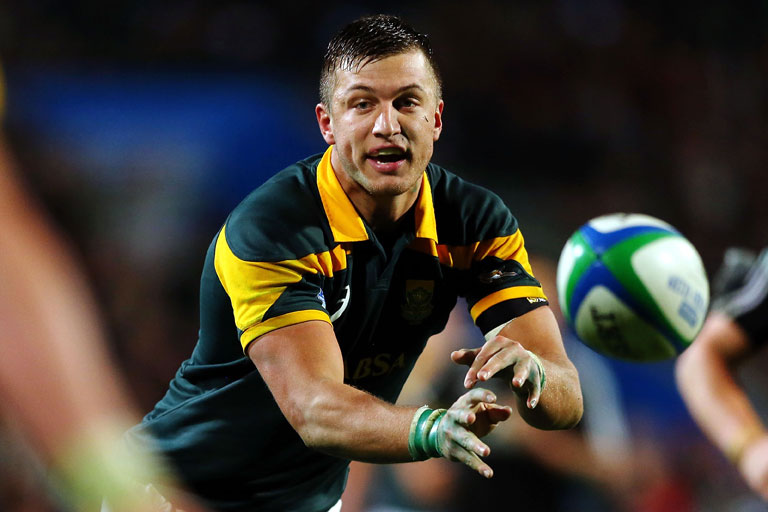 “We’ve accepted our performance against Ireland last weekend was not up to scratch and everyone in the touring squad has put up their hands and dug deep this week,” said Meyer.

“We’ve really worked hard at fixing the mistakes we made and the challenge is now to put that into action on Saturday.”

Meyer however retained the same squad of 23 with Pat Lambie, Cobus Reinach, Adriaan Strauss, Schalk Burger and JP Pietersen all promoted from the bench and the five axed players starting this weekend among the replacements.

Meyer was obviously looking for more experience, therefore the recall of Pietersen and Burger, both veterans of the 2007 World Cup-winning campaign.

The dismal performance of the halfback combination last weekend has seen the Sharks combo of Reinach and Lambie reunited, with the only real rotation that of hookers Strauss and Du Plessis.

Pollard was in great form in South Africa in the home Tests against Australia and New Zealand, but last weekend his shortcomings as a leading tactical kicker were badly exposed in Dublin, with poor service from Hougaard not helping at all.

Burger’s recall is a signal that Meyer is still looking to fill that massive void of an abrasive blindside flanker in the mould of the injured Willem Alberts.

The Springboks have played 18 times at Twickenham, winning 10 and losing eight. They have scored 283 points and 27 tries and conceded 296 points and 26 tries for an average score of 16-17.

The Springbok team to face England in London is: