Springbok captain Jean de Villiers said on Friday in Cardiff it won’t be difficult to motivate themselves for their last Test of the year for Saturday's match against Wales. 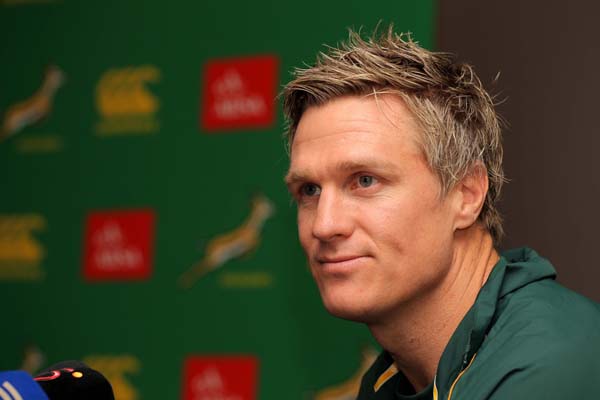 The Boks have won two out of three matches on tour and nine out of 12 Tests this year and won’t have one foot on the plane, he assured.

“It’s pretty easy to motivate yourself. It’s the last one and you can put all your effort into it, not that you don’t do it every other week of the year,” he said.

“The same things are on the line every other time you put the Bok jersey on. The responsibility is there to represent and to do it with pride,” he said.

De Villiers said there’s a lot of motivation and they are playing against a quality side that’s got a lot to prove as well, so that’s the challenge they are facing.

“I think we are professional enough that there’s still a job at hand and we firstly must ensure that we perform well on the day.

“I think Wales have been pretty good lately, sometimes you can just be caught into results, and certainly we have been in that position where we have actually been playing good rugby and not getting the win,” he said.

De Villiers said if one thinks about it you have to put everything in perspective and look at all your facets of play, and said they have had a look at them and they are a quality side.

“They almost beat us back in South Africa and we are under no illusions it will be one helluva Test.

“I have scored a few tries against them (six) but I’ve said walking here, I’ve first faced them in 1999 representing the Under-19 side, and I’ve been back here a couple times since and I’ve always enjoyed Cardiff.

“Wales are a country with a rich rugby tradition and so are we and it makes for a good Test match every single time that we play them.”

De Villiers added that there will be pressure on both teams and to become the big players in the game in a difficult time, there will be crucial times when both need to deliver. He said he is confident in the guys that they have selected, in the backline and in the forwards, they’ve proven it before and hopefully they can do it again on Saturday.

“Yes, they have a quality backline and a big one at that, with a lot of threats but we believe we have a good enough back division to challenge them.”