Sharks coach Brad MacLeod-Henderson admitted it took careful planning to ensure the Currie Cup trophy returned to Durban for the first time since 2010. 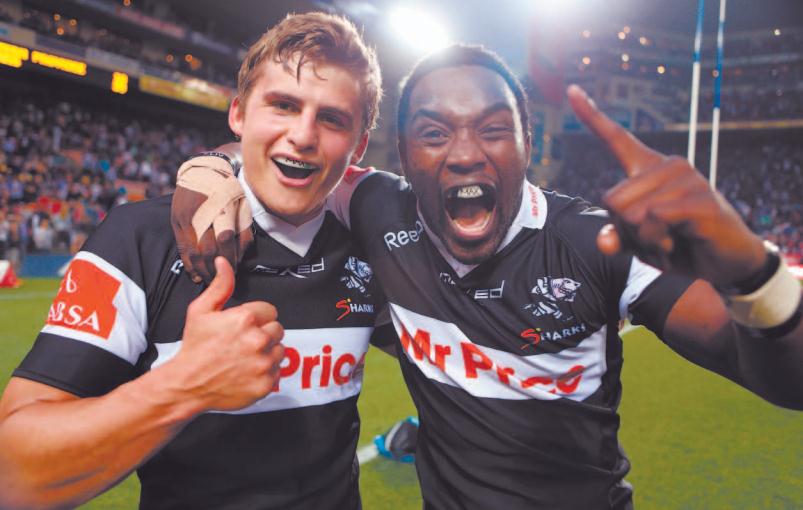 Patrick Lambie and Lwazi Mvovo of the Sharks during the Absa Currie Cup final match between DHL Western Province and the Sharks at DHL Newlands on Saturday in Cape Town. Picture: Gallo Images.

Leading 10-0 early in the final at Newlands after scrumhalf Charl McLeod’s intercept try, it was cut down when Province centre Damian de Allende scored the hosts’ only try to claw their way back to 10-7.

But flyhalf Pat Lambie ensured a 19-13 lead at the break and eventually scored 23 points. He missed four kicks from 10, but succeeded with two from three attempted drop goals.

“Pat has an old head on a young body and just confirmed what a class act he is, after we eased him back into the starting role,” said MacLeod-Henderson.

“I think physically we stood up, our kicking game was strong, while our defence was great. This was a good day for us.”

McLeod effectively sealed the match by scoring his second try in the 58th minute to stretch the lead to 30-19.

“Whether you are underdog or favourite, you just have to focus. The underdog status helped a bit and fortunately we started like a house on fire,” said MacLeod-Henderson.

Sharks captain Keegan Daniel said the open-door policy between them and the coaching staff – with outgoing Director of Coaching Brendan Venter, who will be replaced by Jake White – was vital to their campaign.

“Twelve weeks ago we, as players, sat down with the coaching staff and CEO John Smit to discuss the way forward,” said Daniel.

“We were given the opportunity to say what we expected from them.

“They told us in turn what they wanted from us, so the transparency was great.”

The SA Press Association quoted KwaZulu-Natal premier Senzo Mchunu saying: “We have been inspired by this beautiful display of talent and stamina.

Mchunu said yesterday that the people of KwaZulu-Natal have been on an emotional roller-coaster throughout the cup final.

“We have mobilised the people of this province to go to the King Shaka International Airport to welcome our heroes in style.”

He said the provincial government will line up a series of victory celebrations to promote the great heritage of the Sharks.