The tough decision to move flyhalf Pat Lambie to the bench was part of a rotation policy that has worked very well this year, said Springbok coach Heyneke Meyer. 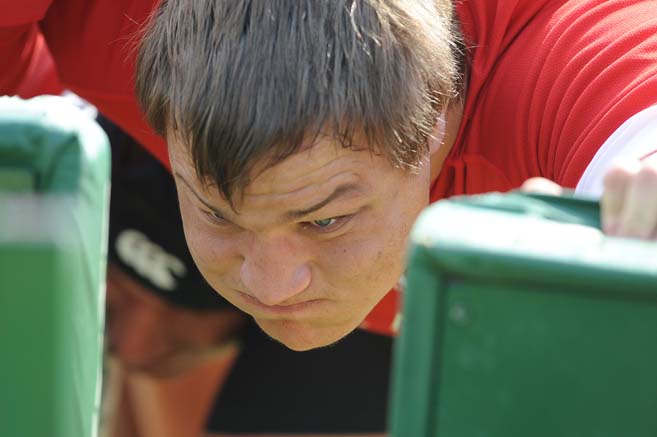 “Gurthro, Adriaan, Bakkies and Pat did very well last week against Scotland and will have an important role to play this week,” said Meyer.

“We have been quite fortunate with injuries this year and I’m very happy that we have managed to keep the continuity in selection.”

Other changes include Ruan Pienaar at scrumhalf for Fourie du Preez who is not available for this Test, with Jano Vermaak added to the bench, while Coenie Oosthuizen, above, replaces the injured Frans Malherbe for his maiden start at tighthead.

Prop Lourens Adriaanse is included on the bench and could make his debut, while lock Pieter-Steph du Toit returns after making his debut towards the end of the Wales Test.

“This is a great opportunity for Coenie and we believe he’s ready to make the step up to a starting role in the team,” said Meyer.

“I’m also very happy for Lourens, who has been part of the squad for almost the entire season. He’s waited patiently for an opportunity and what better way to make your debut than against France in Paris.”

Mtawarira, Etzebeth and Steyn are part of a group of 10 players selected for every Test in 2013, along with Willie le Roux, Jean de Villiers, Bryan Habana, Ruan Pienaar, Oosthuizen, Strauss and Lambie.

“Most of the players have received ample game time and showed they have what it takes to perform at Test level. Our aim is now to keep on improving against France and hopefully end a very successful season on a high note,” said Meyer.