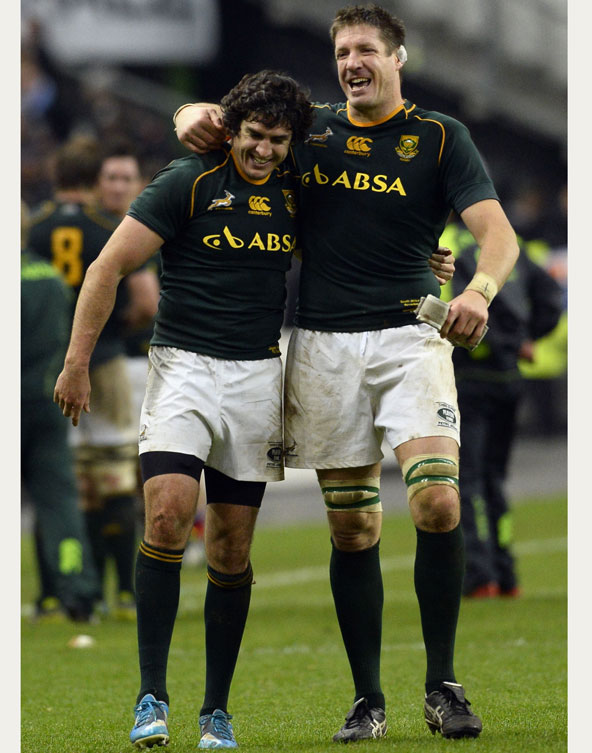 He brought back Fourie du Preez, Jaque Fourie and JP Pietersen with great effect, but in last weekend’s historic win over France in Paris, it was probably the performance of veteran lock Bakkies Botha, pictured right with Fourie, which brought him his biggest smile.

The Boks, who returned to South Africa yesterday, had 10 foreign-based players featuring for them this year, and Meyer said he will continue the policy even though he is prepared for the fact they won’t be playing in every single Test in 2014.

Meyer, who also expressed his satisfaction with the new-found depth at tighhead behind Jannie du Plessis, but continued his concern about the depth in the No 5 lock position and scrumhalf, but said Botha still has what it takes.

“Bakkies showed that he can still play at this level,” said Meyer of the 77-cap lock who is now 34, and even blew his trademark kiss to the French after an altercation.

“I took some criticism for selecting Bakkies. but he stepped into the role that Eben Etzebeth was supposed to play. He stepped up when he needed to.”

French skipper Thierry Dusautoir lauded the Boks and said they showed why they and New Zealand have created a gap between the chasing pack.

“In the rucks the Springboks were just so physically strong,” he said. “They just prevented us from getting anything going. We were simply unable to play and to make an impression. That was where they eventually clinched the game.”

Meanwhile, Etzebeth has been ruled out of this weekend’s Barbarians game due to his ankle injury, but eight other Boks will still feature against Fiji.