Brandon Truter left Richards Bay unceremoniously after a spat with the management of the team he had built into promotion contenders in the GladAfrica Championship. 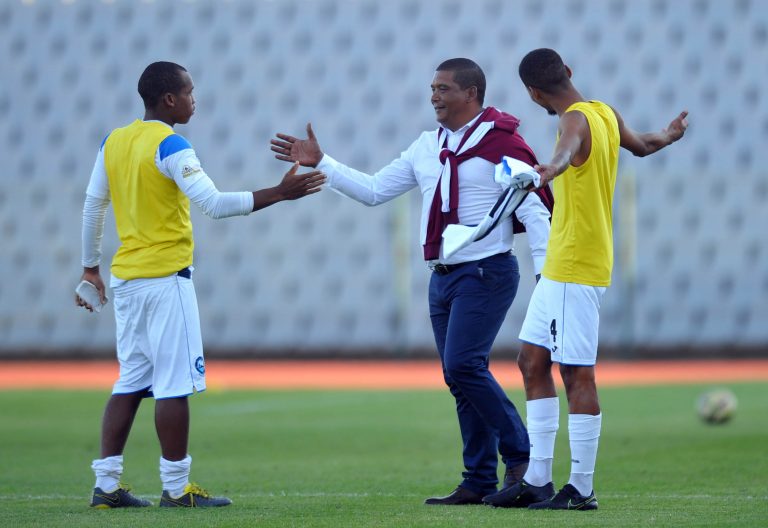 He is now slowly doing the same at Swallows whom he has moved up to 10th in the Championship standings.

Last Sunday, he got a chance to inflict some pain on his former team as he guided the Dube Birds to a 1-0 win but he preferred to not celebrate his personal triumph and put the team first.

“I don’t want to talk about my personal goals for this match,” he told Phakaaathi after the match at Dobsonville Stadium. “But for the team it was always about the three points. For me it is just a cherry on top that we got the win against my former employers. But I am happy for the massive three points and we are now unbeaten in three games and we kept clean sheets as well. It is a step forward for us,” he added.

Given Thibedi scored on 17 minutes to help Swallows to their third win in 10 games which – complemented by three draws and four defeats – puts them in 10th position with 12 points.

“This is what we like to do, it’s a home game and three points are a must. The boys are functioning well and the understanding and the spirit is where it should be and I am happy for that.

“The boys have adapted, they are coachable and they are learning. The experience from the senior boys like (Virgil) Vries, Vuyo (Mere), Cheese (Lebogang Mokoena) and (Sibusiso) Masina counts a lot. That core helps a lot in terms of coaching, they are keeping it organised, the structure is nice. Here and there I feel we can still do better and make better decisions, especially in the last third. I felt we should have been 4-0 at half-time and kill the game. Not scoring put us under a bit of pressure because they believed they could sneak in one at the end,” said Truter.

Swallows are home again on Saturday where they host JDR Stars.

Durban’s sea breeze must have worked Thembani Nevhulamba’s appetite as he went on to grab a hat-trick to help Tshakhuma to fourth and back in contention for promotion in the early stages. Kanyisa Mayo scored the only goal for the home side. Eagles have meanwhile hired Moma Medic as their new coach.

AmaTuks staged a spirited second half come back to make sure they keep the full points against a stubborn Abantu Bemthetho. The home side got off to a good start when Kamohelo Mahlatsi opened the scoring. But his effort was quickly cancelled out by Decide Chauke who went on to give Sporting the lead going into the break. But Athenkosi Dlala equalised in the second half and Nqobeko Dlamini put AmaTuks in the lead again. Mahlatsi completed his brace late in the match to seal the result for Zipho Dlangalala’s side.

Thabang Sibanyoni was on target in the second minute to give the home side the lead and they looked headed for the win which would take them to 19 points and three behind the leader Uthongathi. But it was not to be as Ea Lla Koto managed the equaliser in the second half.

The Cane Cutters cruised to an easy win, adding to Ezenkosi’s problems as they beat them 2-0 to stretch their lead atop the standings to five points. Francis Baloyi opened the scoring and Menzi Ndwandwe added the second.

Ajax Cape Town coach, Adries Ulderlink must have been left fuming at his defence for yet again letting the team down. It was the second time in three games that the Urban Warriors have conceded three goals in one match. Abednigo Mosiathlaga gave the home side an early lead as he scored fivenumtes into it. Grant Magerman increased the lead to 2-0 at 20 minutes. Ndiviwe Mdabuka however cut his former team’s lead in half just before the break. A minute into the second half, Brandon Theron brought parity with his goal but Ajax took the lead again through Eleazar Rodgers’s penalty. But Gregory Roelf ensured the Spirited ones didn’t leave empty handed as he equalised right at the death.

Kings coach Joel Masutha will be happy with getting out with a point from a Steenberg side he described as awkward ahead of the game.

Here is the updated leaderboard in the GladAfrica Championship pic.twitter.com/456JOuamT9