Doctor Khumalo was born Theophilus Doctorson Khumalo in Soweto on the 26th of June 1967. Apart from his first name being out of the ordinary, his popular second name "Doctor" has been changed from Doctorson. 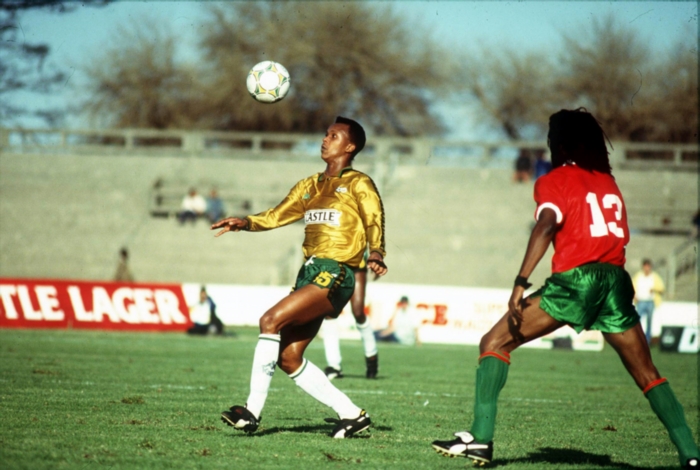 He made the S-curl and cut hairstyle popular in the 90’s and is remembered for another hairdo known as the Perm. Here are five facts that you might have not known about 16 Valve.

1 Doctor Khumalo played for Swallows before he moved to Kaizer Chiefs as a youngster, he was with the Dube birds from 1984 to 1985 before playing for Chiefs in 1986 at the age of 19.

2 Doctor’s first goal for Bafana Bafana was a penalty in an international friendly against Cameroon at the Kings Park Stadium in July of 1992.

3 South Africa was prohibited from participating in international sporting competitions due to apartheid. When the international boycott was lifted on South Africa, Doctor Khumalo was named as a member on the first squad that represented South Africa in FIFA tournaments.

4 Doctor Khumalo made his film acting debut with the German/South African production Themba. Khumalo plays a coach for the under 21s, the movie is about Themba, a young and ambitious football youth, who is faced with poverty, AIDS and violence, but eventually makes his way on to the South African national team.

5 He scored 9 goals in 50 appearances for Bafana Bafana. His most memorable game for the national team was against Brazil, 16 Valve scored a goal and provided the assist for Phil Masinga to score the second goal. The match ended 3-2 in favour of Brazil.

6 He collaborated with then Studio Mix VJ and current Kaya FM breakfast show host Bob Mabena to release the 90’s smash hit “Get funky.” This was the Duo’s successfully record, they collaborated to produce the follow up single titled “Akesoyibone.” This song wasn’t as popular as their first track.